ISLAMABAD: The National Command and Operation Centre (NCOC) on Monday decided to tighten the restrictions given the deteriorating coronavirus situation across the country.
Federal Minister for Planning, Development, and Special Initiatives Asad Umar on Twitter said: “In the NCOC meeting this morning, we decided to increase restrictions of activities contributing to a sharp increase in Covid-19 positivity.”
The local administrations across the country have been directed to tighten the implementation of SOP’s and crack down on violations that are taking place, the minister said.
The forum met to decide the future course of action. Pakistan is currently grappling with the third wave of coronavirus which is said to be more lethal and dangerous by the health authorities.
Earlier, Asad Umar dismissed rumours that the country is heading towards a complete lockdown. “Complete lockdown is not the solution,” he said. “We tried to explain that to people during the first wave [of the coronavirus] but they did not understand. You cannot shut down the entire country and steal people’s livelihoods,” added the minister.
Meanwhile, the coronavirus has claimed 20 more lives in the country during the past 24 hours, taking the overall death toll to 13,863, said the NCOC on Monday.
The latest statistics of the NCOC showed that Covid-19 has infected 3,669 more people during the aforementioned period. The total count of active cases is 33,070 and 2,423 of them were stated to be in critical condition.
The positivity ratio was recorded at 8.43 percent during the past one day as a total of 43,498 tests were conducted across the country, while overall 9,817,491 tests have been conducted so far.
Some 1,686 people recovered from the deadly disease during the last 24 hours, while so far 583,538 people have regained their health from the Covid-19.
Meanwhile, the Punjab government has revised the schedule of lockdown in markets of several cities in the province.
According to the Primary and Secondary Healthcare department spokesperson, markets in districts Rawalpindi, Jehlum, Sheikhupura, Chineot, Khanewal and Dera Ghazi Khan will remain closed on Fridays instead of Sundays. The spokesperson said that lockdown in markets of these cities would be implemented on Fridays and Saturdays while traders and shopkeepers of these cities could open their businesses on Sundays. However, lockdown timings would remain the same and all markets across the province would be closed at 6:00pm.
Meanwhile, Minister for Federal Education and Professional Training Shafqat Mahmood has said that a high-level meeting will be held at the National Command and Operation Centre (NCOC) on Wednesday to take a decision regarding opening or further closure of educational institutions.
The minister was speaking at a ceremony in Lahore Chambers of Commerce and Industry (LCCI) where he shared his opinion about the pandemic situation in the country and its effects on the education sector.
“The NCOC believes that there’s a high risk of Covid-19 spread in schools. 50 million children are linked with education and if someone gets infected, the disease would spread,” the minister said. He further said, “We tried to keep schools open where things are better.”
He said it is a very difficult decision of the government to close educational institutions as there are around 20 million children still out of schools in the country. He said the government launched a Tele School TV channel to educate children at their homes in the wake of Covid-19.
Regarding the March 24 meeting at the NCOC, Mehmood said, “We would implement the recommendations of the health and education ministers.”
Mahmood said that a uniform curriculum will be implemented across the country to improve the quality of education. He said that the Punjab government has constituted a committee to introduce a uniform curriculum.
Earlier on Sunday, Shafqat Mehmood said that an important meeting is scheduled to be held on Wednesday during which the decisions regarding the reopening or further closure of educational institutions would be taken. Taking to his Twitter account, the minister reminded the masses that the third wave of the coronavirus is serious, therefore, it requires careful review. – TLTP

Govt is committed to ensure transparency in elections, says PM 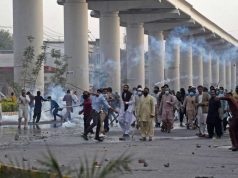 Dollar edges up before US inflation data

Govt is committed to ensure transparency in elections, says PM

Dr Firdous hits out at PML-N leaders’ meet with ‘fugitives’ in...