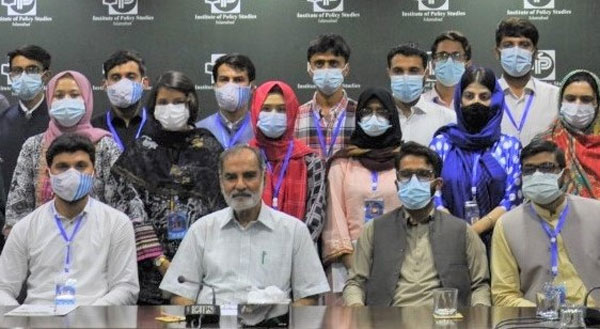 ISLAMABAD: A delegation of research students from different universities of Pakistan and Afghanistan visiting IPS were apprised by Khalid Rahman, the Institute’s chairman, on the immense opportunities enhanced regional connectivity can bring in Afghanistan, Pakistan and Central Asian Republics in the wake of the US withdrawal from Kabul.
The delegation comprising 21 members was part of the 8th International Summer School at the Bara Gali campus of the University of Peshawar.
The discussion in the sitting revolved around the importance of regional connectivity and post US-withdrawal Pak-Afghan relations with a focus on bilateral trade and people-to-people contact.
Rahman shared his insights on the evolving situation in Afghanistan, stating that Taliban were a reality which even the Americans had to accept when they decided to have dialogues with them some years ago.
He said that there was hardly anything done in the previous Afghan government’s tenure to cater for the vacuum that was certain to take place following the withdrawal of US forces, and this lack of planning eventually led to the fall of Kabul without any resistance.
The best way forward for Pakistan and other regional countries now, he opined, would be to accept the new regime in the country and try to engage them in a hope to set things in the right direction moving ahead, he added.

Roads dug in garb of improvement