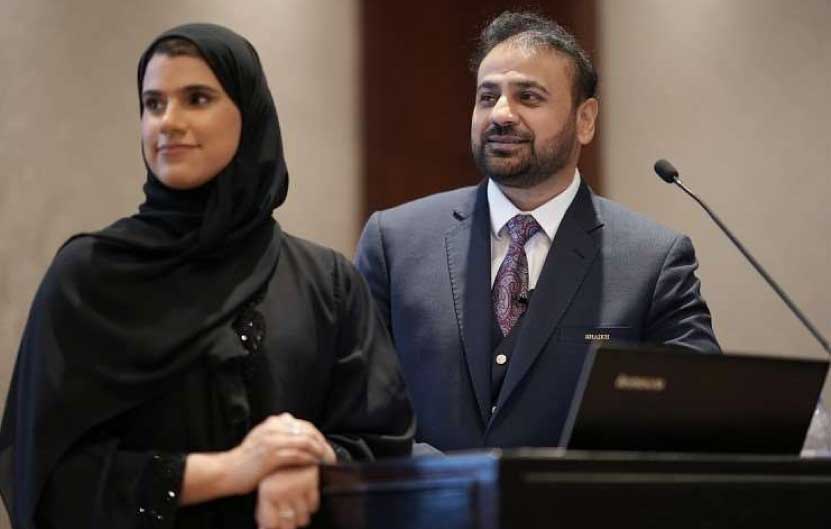 DUBAI: A press release says that more than 120 Emirati and international citizens, including business executives, diplomats, public and private sector and government officials, and media representatives from leading organisations, gathered at the Dusit Thani in Dubai on Saturday for Emirati Women’s Day and the “Preparing women for future leadership” initiative, which was set up by Berkeley & Musa Shaikh Voice of Global Women & Berkeley The Investors Club.
The keynote speeches by Dr. Musa Shaikh were the best parts of the Women-focused event. He talked about focusing on women’s development, women’s innovation, creating women’s opportunities, women’s training, consulting, and advisory for start-ups, women’s start-ups and incubators, and the importance of women talking to each other and connecting.
Dr. Shaikh talked about how important it is to prepare women for future leadership roles. He used facts and figures from reputable data companies to show that 750 million girls are not in school, which is a big problem for women’s development. Maitha al Balochi was a co-host. She made people laugh all over the show, and the audience was amazed by her performance.
Aarefa Saleh Al Falahi spoke at the event and talked about Emirati Women’s Evolvement in the UAE. She talked about her own success in life and encouraged the women in the audience to keep making progress at work and combine modern knowledge with traditional cultural values.
Salma Al Qubaisi talked about how to help women become entrepreneurs and presented her entrepreneur platform. She said that 40 writers will work together to write two books with the titles Voice of Emirati Women and Voice of Global Women. These books will help the world learn about important issues and add value to the world as a whole.
Dr. Amna Al Nakhi introduced the idea of vitamins and talked about a few of the most important vitamins for our success. She captivated the audience with her regal personality and gave them a lot to think about.
Hind Mubarak Al Zaabi, Executive Director of the Healthcare Facilities Sector at the Department of Health in Abu Dhabi, spoke to the audience and talked about women in leadership in the United Arab Emirates. At the same time, she thanked doctors and other medical professionals for their important work during COVID-19 and post-COVID governance. Her speech was impressive, and her ideas had a big effect on the people who heard it.
Dr. Abeer Naajem AlRasbi is the founder and CEO of LEAD for Training and Consultation and the Director of Student Leadership at Zayed University. She spoke on the topic of “Art of Self Leadership” and inspired the audience with her dynamic knowledge and skills for empowering others.
Ellen Joncheere is the CEO of HRD Antwerp, a diamond and jewellery certification company based in Antwerp, Belgium. The company has offices and grading labs around the world, including in Belgium (Antwerp), India (Mumbai and Surat), the United Arab Emirates (Dubai), and Spain (Madrid), She talked about her success story and how she became a woman leader. Her presentation was about testing diamonds, and a live demonstration was set up on stage, which the audience liked a lot.
Asma Jan Muhammad talked about the Priority Paradox for the better half of her talk. She got the attention of the intellectual audience in the hall and inspired them with her deep thoughts on the topic.
In a panel discussion, Mona SulaimanTajarbi, Sandi Saksena, and Nousheen Mukhtar talked about how gender equality today can lead to a sustainable future.
Dr. Musa Shaikh thanked the sponsors, Berkeley Middle East holding, International Teaching Academy, and HRD Antwerp, for their work on the women leadership conference.