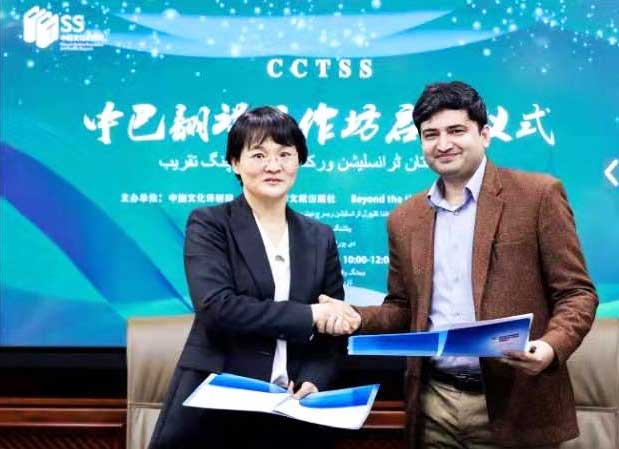 BEIJING: Chinese Culture Translation & Studies Support (CCTSS) has paved the way for Pakistan-China literary Corridor to bring two people closer by launching “Sino-Pakistan Translation Workshop” on Wednesday.
CCTV launched year-long activities to celebrate the 70th anniversary of the establishment of diplomatic relations between all-weather allies.
Xu Baofeng, Executive Vice President of Belt and Road Academy of Beijing Language and Culture University said that on the occasion of the 70th anniversary of establishing formal diplomatic relations between the People’s Republic of China and the Islamic Republic of Pakistan, CCTSS Sino-Pakistani Translation Workshop aims to further enhance the cultural exchange between two countries, promote mutual translation and publishing of cultural works and deepen the understanding of our two peoples.
“We are making efforts to make it easier for foreign readers to appreciate classic works from a different culture and have a better understanding of the essence of two civilizations”, Xu mentioned.
He further said that Chinese are always proud to say that China and Pakistan are iron brothers. Usually, the relations are described as higher than mountains, deeper than oceans, sweeter than honey, and stronger than steel. However, our understanding about each other is far from enough.
“We seldom know that the Ancient Silk route was passing through parts of Pakistan, and Chinese traders travelled to Europe through Pakistan. Around two thousand years ago, famous Chinese Monk Xuan Zang, made several trips to areas, which are part of Pakistan now”, he told China Economic Net
He further said that Cultural works translation and publishing would be an efficient way for us to know better about each other and deepen our understanding to bring our relations to new heights, adding literature and history will be our first consideration. Meanwhile, we are planning to train young translators by writing textbooks and creating language training lessons targeting foreign learners.
“Human history is recorded through literature, whether it be an oral tradition or the legends written down. If the world needs one method to unite together, literature is the tie to connect the world. It’s time to further strengthen the understanding of our two peoples. In addition to the classic works to help people know more about each other’s culture and history, we want to stress modern literature, the one mirroring the reality of people’s lives,” he said.
Talking to the audience Prof. Engr. Zamir Ahmed Awan, Sinologist (ex-Diplomat), said Pakistani students in China should be equipped with in-depth China-knowledge and professional education; they can play a significant role after returning to Pakistan strengthen the existing cordial relations between the two nations.
On this occasion, speakers said that the workshop organiser, Chinese Culture Translation & Studies Support (CCTSS), is a sinologist and translator’s talent bank. The platform has already gathered several talents of different languages, including Urdu.
They further said that we want to discover and invite more and more of them to work together for mutual translation and appreciation.
A signing ceremony was also held to translate and publish Urdu versions of books such as “China’s Rise in the Asia Market Construction” and “Spring and Autumn on the Sea”.