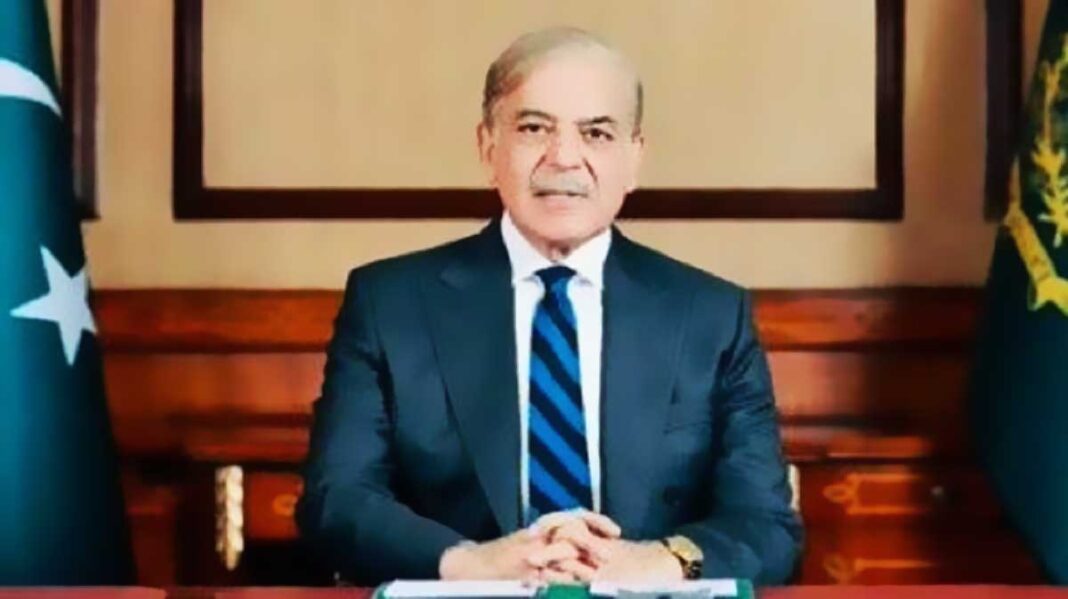 ISLAMABAD: Prime Minister Shehbaz Sharif on Wednesday expressed Pakistan’s firm commitment to the purposes and principles of the Charter of the United Nations.

The prime minister, in a meeting with UN Resident Coordinator Julien Harneis, highlighted that Pakistan had been contributing actively to the work of the UN, especially in the areas of peacekeeping, humanitarian action, climate change, and international cooperation for sustainable development.

Various areas of UN’s work and cooperation with Pakistan were discussed during the meeting including the United Nations Sustainable Development Cooperation Framework, flood relief, food security, and ecosystem restoration.
The prime minister appreciated the significant role played by the UN in supporting Pakistan’s progress towards the attainment of UN Agenda 2030 and the Sustainable Development Goals (SDGs).

He expressed serious concern about the devastation caused by the recent floods across Pakistan, adding that the provision of humanitarian relief to the people in the affected areas was a high priority of his government.
The UN Resident Coordinator briefed the prime minister on the ongoing activities of the United Nations in Pakistan including in the areas of sustainable development, humanitarian assistance, environmental protection, food security, and climate change.

He also reiterated United Nations’ continued support to Pakistan in its ongoing endeavor for a resilient recovery from the COVID-19 pandemic and sustainable development.
Julien Harneis is working as the UN Resident Coordinator in Pakistan since January 2020. He chairs the UN Country Team comprising all UN Agencies, Funds, and Programmes that are operational in Pakistan, and coordinates their activities to ensure alignment of UN assistance with national development priorities and plans.

Meanwhile, Prime Minister Shehbaz Sharif said that China-Pakistan Economic Corridor (CPEC) was laying foundation for sustained indigenous economic modernization and its growth to connect markets within and across the region was a logical next step.
In an exclusive interview with the Global Times he spoke on a broad range of topics including China-Pakistan relations, regional and international situation, CPEC and upcoming 20th National Congress of the Communist Party of China (CPC).
Shehbaz talked about attaching great importance to the joint construction of the Belt and Road flagship project, and refuted the some countries’ statement the CPEC was a threat.

Since its launch in 2013, the CPEC has continued to make rapid and tangible progress. Over the past 10 years, the construction of the CPEC has helped Pakistan reduce the bottlenecks caused by past power shortages and weak infrastructure, laying the foundation for the development of sustained economic modernization, he added.
“As a prime minister, I give priority to the timely completion of the ongoing CPEC project as the cornerstone of our future bilateral economic cooperation agenda,” he remarked.

Shehbaz Sharif said he visited a number of CPEC projects, including the Port of Gwadar, and directed the completion of projects as scheduled so that the people of the both countries can reap the benefits.
He said, the Chinese enterprises and investors were the key to cooperation between the two countries, and the Pakistani government has spared no effort to facilitate them and begin to prepare for the implementation of the common priorities of the next phase of the China-Pakistan Economic Corridor.
“We will continue to work closely with China to enhance the momentum of cooperation between the two countries,” he added.

To a question about his expectations for the future planning and development prospects of the corridor, he said, the CPEC was a long-term blueprint for the two countries to support each other on the long road of development and improve the well-being of their people.
The construction of the China-Pakistan Economic Corridor has become more concrete after achieving an early harvest phase focused on energy and infrastructure development.

“In the short term, we hope to complete major infrastructure projects under construction as soon as possible, including the strategic Pakistan Main Line 1 (ML-1), which will further accelerate the transfer of industries and help consolidate our integration into global value chains,” he said.
About Pak-China friendship, he said the all-weather strategic partnership between Pakistan and China was deeply rooted in people’s hearts, covering all areas of bilateral cooperation.

“With the careful nurture of generations of leaders of the two countries, all political factions in Pakistan have a full consensus on further deepening the strategic partnership,” he remarked.
Shehbaz Sharif said, the two countries support each other on the issue of mutual core interests. Pakistan has always firmly supported the One China Policy and believed that Taiwan was its an inalienable part.

He said, Pakistan-China relations were an important factor for peace and stability in the region and the world. Pakistan was one of the earliest supporters of President Xi Jinping’s Belt and Road Initiative. Its flagship project, the CPEC, has changed Pakistan’s economic landscape.
“Pakistan is also one of the main partners in global development initiatives. I believe that Pakistan and China will continue to work together to build a community with a shared future for mankind”.

Sharing his impressions about China, he said, “I have visited China many times and always amazed at the rise of China. Over the past 40 years of reform and opening up, nearly 800 million people in China have been lifted out of poverty, which is an unprecedented great achievement and a miracle of modern society.”
He appreciated concentration, wisdom and determination of Chinese leaders and the hard work of the Chinese nation to put China on the modern path of success and prosperity.

“I am also keen about the profound impact of Chinese civilization on the world. Whether it is China’s governance model, the rapid development of modernization and economy, and adherence to the people-centered development ideology, it is of reference significance for all developing countries, including Pakistan,” the prime minister appreciated China’s stride.
Regarding upcoming 20th National Congress of the CPC to be held in Beijing and development of China in the past 10 years and his expectations for China’s future development, he remarked, “China’s rise is a modern miracle. This goal cannot be achieved without the leadership of the Communist Party of China”.

The Communist Party of China holds high the great banner of socialism with Chinese characteristics in the new era and was leading China on a new journey of building a modern socialist country in an all-round way, he added.
The prime minister said, China has built itself into an economic power and its people’s per capita income has doubled in 10 years.

“I believe that China’s ‘double cycle’ strategy and emphasis on high-quality development are formulated in response to the economic realities of the next decade. I firmly believe that under the leadership of the Communist Party of China, the Chinese nation will be able to realize the dream of great national rejuvenation”.
To a question about China’s role in the current world situation, he said, “I agree with Chinese leaders that the world today is undergoing a great change that has not been in a century. The world is in turmoil, and conflicts continue to affect many parts of the world”.

In this challenging era, developing countries, including Pakistan, all agree with China’s emphasis on responding to the current international changes by establishing mutually beneficial partnerships and adhering to peace, development and dialogue, he added.
Pakistan, like the vast number of developing countries, has benefited from President Xi Jinping’s open and inclusive global development platform, the far-sighted Belt and Road Initiative.
The CPEC, Shehbaz said has made Pakistan a fulcrum of regional integration, connecting South Asia, Central Asia and the Middle East. Similarly, global development initiatives provide a comprehensive blueprint for achieving sustainable development goals.

“In fact, these initiatives show that China is ready to shoulder the responsibilities of major powers, strengthen international cooperation, and promote the construction of a community with a shared future for mankind,” he added. – APP