“As you are well aware that we achieved this country after incredible sacrifices and even after achieving it the sacrifices are still continued. We are deeply Thankful to Almighty who granted us this beautiful homeland”. 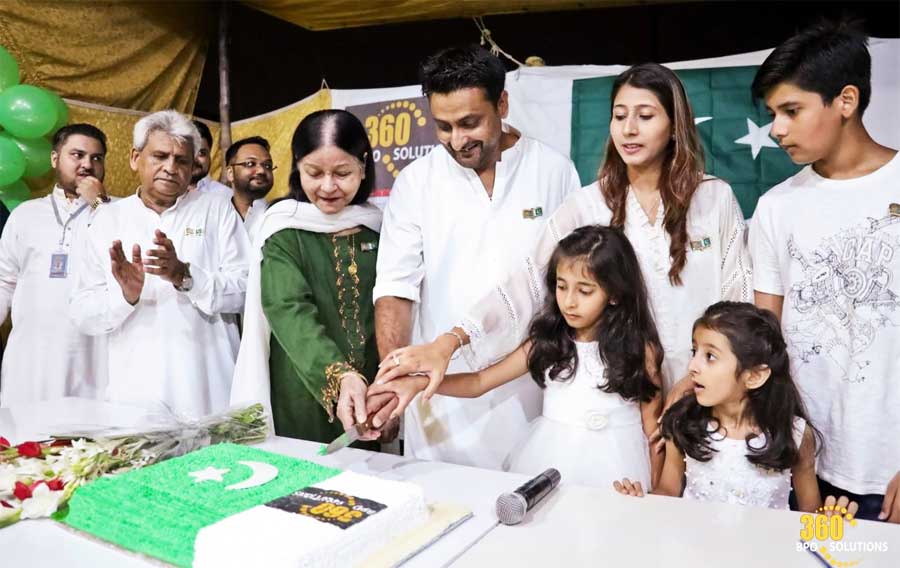 360 BPO Solutions, one of the first and leading BPO Companies of the country in World’s 7th largest city Karachi on Sunday marked the country’s 75th Independence Day as Diamond Jubilee. Chief executive of the company Ali Sayani hoisted the national flag to the tune of the national anthem and cut the Independence cake in the presence of the Chief guests, employees, management and media. Sayani paid tribute to the sacrifices of ancestors and vowed to transform Pakistan in accordance with the vision of the nation’s founder Quaid-e-Azam Muhammad Ali Jinnah and national poet Allama Muhammad Iqbal.
Ali Sayani also expressed solidarity with the people of Indian Illegally Occupied Jammu & Kashmir who are facing brutal military siege for the decades and reassured moral support for their legitimate right to self-determination. He stressed that Pakistan has always desired for peace in the region and beyond. He underscored that Pakistan wants peaceful relations with all international community. However, for durable peace and stability in South Asia, it is essential to resolve the core issue of Jammu and Kashmir in accordance with the UN resolutions and the wishes of the Kashmiri people, he emphasised.
At speaking on the event, Sayani felicitated the nation, particularly the Pakistani youth, on the 75th anniversary of the independence. Sayani stated: “Aug. 14 reminds us of the epic struggle of our ancestors to secure a separate homeland for the Muslims of the subcontinent where they could live according to their own will. It is a day to reiterate the firm resolve to uphold our national values of unity, faith and discipline as envisioned by our Quaid and renew our commitment to the objectives of the creation of Pakistan”. The CEO also thanked the Chief guests and people for congratulatory messages and for participating in the Pakistan Independence Day celebrations.
On Aug. 14, 1947, the independent state of Pakistan appeared on the world stage for the first time when the Indian subcontinent was formally divided into two new dominions of India and Pakistan under the terms of the Indian Independence Act, adopted by the British Parliament. The Muslims’ proposal to establish a separate state was accepted on March 23, 1940.
He highlighted that today “Pakistan is a proud nation on the path of development and prosperity”.
“It has a vibrant and dynamic population which is playing a pivotal role in the country’s progress. Standing shoulder to shoulder with them are our valiant armed forces who have remained at the forefront for the security of our motherland,” he was quoted as saying.
The last 75 years are a testimony to the fact that Pakistan has achieved tremendous progress and success in all spheres of life even in the face of grave challenges. Pakistan will continue to play its responsible role for peace, stability and development in the region and the world, Sayani added.
The employees of 360 BPO Solutions staged a performance on national songs and delivered performances highlighting the historic struggle for the creation of Pakistan.
At the end of the ceremony, Ali Sayani distributed performance bonuses among the employees and managers of the company.
A special cake was also cut by the CEO, along with his spouse, kids, parents as well as other company employees and officials, on this momentous occasion followed by dinner for the entire staff.
Ali Sayani said in his Independence address that 360 BPO Solutions is serving the international IT market since 15 years and proudly representing the country and bringing remittances. It is a client based offshore firm serving US, Canada, UK & Australia, providing back office support, call centre services, software house and website manufacturing and development. He tells that they always tried to promote the country via telling the correct sitting place to their clients based offshore. During that time most people used to hesitate mentioning their base in Pakistan. Gradually other people of the industry also started to highlight Pakistan as their operational hub. Things get better time to time not overnight. He says “we keep strong patriotic emotion for the country, our hearts beat with it. Tonight we are celebrating this auspicious event to halt all of our business operations. We are independent and we better understand the significance of the freedom. We pay tons of Thanks to Almighty for this amazing place of the planet as our own homeland. Sayani also prayed for the prosperity of the country and emancipation of its people.
Sayani urged the people to strive to represent the country on international forums, we should be proud of our incredible country and we should sincerely work for it. He says “obviously we need to represent ourselves truly than only we shall do the true words and if we shall do the words nicely people will know us in good words as “Ye banda Pakistan se hai Pakistan ke log ache hote hen”. How can we have a good end if the start is not good. Remember the importance of the freedom whole year not just on any single day, we have to care it”.
Ali Sayani advised the nation that “do not be disappointed due to present turmoils, good days are ahead, we all just have to play our roles & characters well with utmost honesty”. 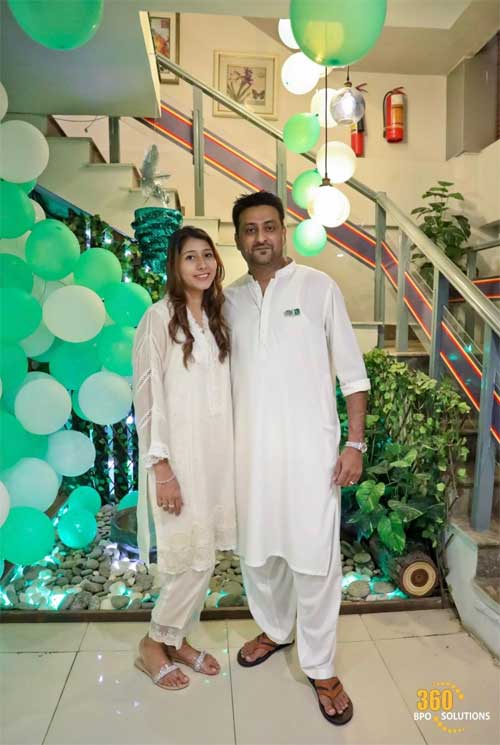 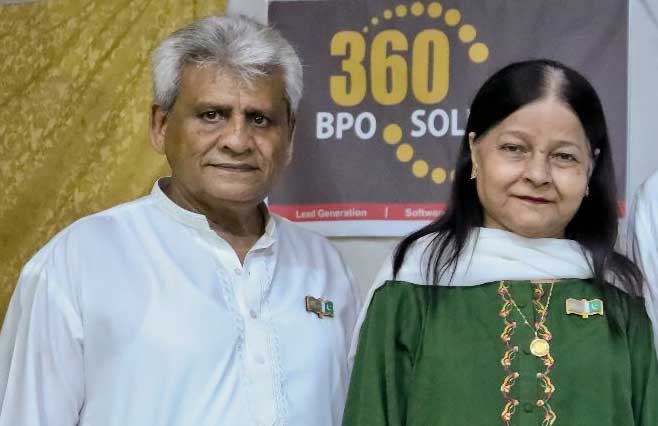 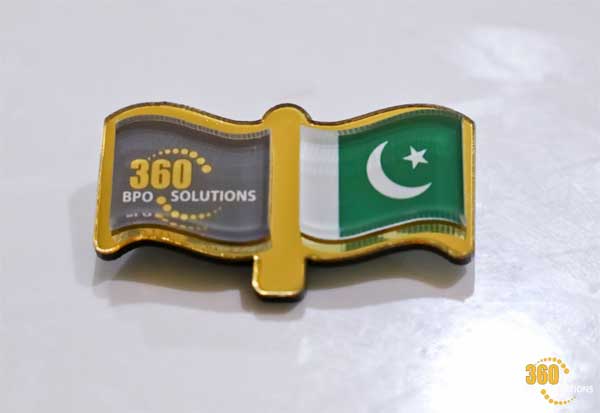 All business activities were stopped during the Independence ceremony

International clients of 360 BPO Solutions from UK, USA, Canada and Australia conveyed congratulatory messages over Pakistan’s 75th independence to CEO Ali Sayani. Mr. Sayani thanked them and prayed for the prosperity and success of the countrymen around the globe. 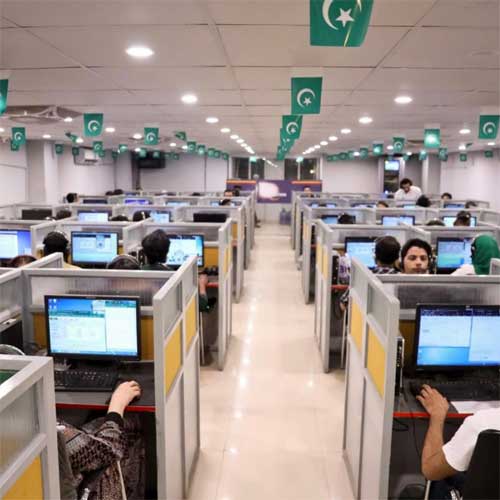 The headquarter was beautifully decorated on the occasion of Diamond Jubilee. The company’s doors and walls were decorated in the colour theme of the national flag with great skills, hard work and beauty. This decoration captivated the visitors.
By doing this, love for Pakistan was expressed and was also expressed that we would not hesitate to sacrifice our lives for this great country at the time of need.

During the independence ceremony, when the national anthem was read, the participants stood up from their seats in respect. Everyone hummed the words of the national anthem together. The tune of the National Anthem left an emotional impression on the audience – every face was reciting the beautiful anthem of their country with serious faces and devotion.