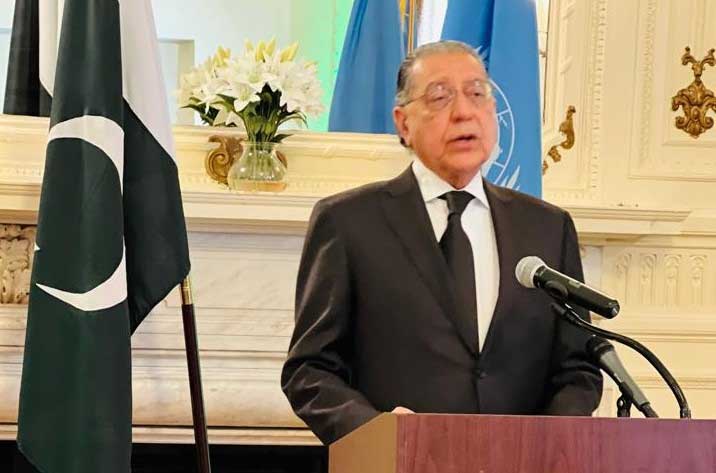 NEW YORK: The 82nd celebration of Pakistan Day was held at Pakistan Mission to the United Nations, New York jointly with the Consulate General of Pakistan in New York today. The national flag was hoisted by the Permanent Representative of Pakistan to the UN Ambassador Munir Akram, as the national anthem was played.
The ceremony began with a recitation from the Holy Quran.
Ambassador Munir Akram congratulated all Pakistanis on celebrating this historic day when the idea of Pakistan was conceived. He told the gathering that “this is not only the time for renewing our commitment to the concept, the idea of Pakistan but also, first and foremost to recognize the foresight and vision of our founding fathers in declaring the quest for Pakistan.
Paying tribute to the forefathers of the nation, he said, “We should be grateful of our forefathers especially Quaid-i-Azam for having seen what is for the Muslims in the sub-continent at the time of independence” said the Permanent Representative to Pakistan in the United Nations, Ambassador Munir Akram.
Expressing his gratitude of being a free nation he insisted to build our nationhood on the principles of self-reliance and self-resilience. . “Pakistanis are among the most generous people. Our hospitality, the ability to survive in the worst of circumstances, our resilience as a nation despite challenges is the hallmarks of greatness which mobilized at the time of independence”.
He said that “The first and the central task of our very existence should be the preservation and prosperity of Pakistan”.
Expressing his solidarity with the people of occupied Jammu and Kashmir, he said that “On Pakistan day, we cannot forget people of Jammu and Kashmir” “They were to be made part of Pakistan. In spirit they are part of Pakistan”: Amb Munir Akram. He warned that the ideologically driven and motivated and ruthless government in India which rules are capable of genocide, and we must face this challenge to defend our Muslim brothers from their oppression.
Today, we witness the plight of our fellow Muslims and other Muslims in India. We can only admire the vision of our great leader who foresaw what would be fate of Muslims under Hindu domination. We cannot but call world attention to their plight. “We must continue to mobilize international support for them: he said. We are committed to promoting these objectives at the United Nations.
He asked the nation to stay strong and not to lose faith, “Our Quaid described Unity, faith and discipline and this was part of the vision he had that these three qualities are the qualities that are essential for the preservation of Pakistan and for its progress and prosperity”
“If you see our history of the last 70 years, it is a history of resilience, it’s a history where we survived so many setbacks”, he said and “we are today one of the strongest countries in the world, as a people, as a security, military force, as an economy, if you take all these factors into count, Pakistan is a powerful, influential and important country”
Let us celebrate together Pakistan’s moments of joy and join hands in overcoming our challenges and exploiting the exciting opportunities for peace, progress, and prosperity, he concluded.
Consul General New York, Ms. Ayesha Ali read out the Pakistan Day message of President Dr. Arif Alvi while Deputy Permanent Representative Aamir Khan read out the message from Prime Minister Imran Khan on the occasion.
The event was moderated by Jawad Ajmal, First Secretary and was attended by officers and staff of the Mission at the United Nations and the Consulate General, New York.