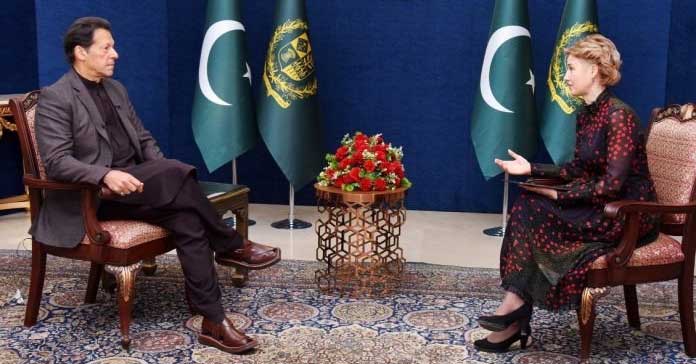 ISLAMABAD: Prime Minister Imran Khan has said that Pakistan will not play “camp politics” as it wants to have trade relations with all countries to lift its populace out of poverty.
In an interview with Russia’s state-owned media outlet Russia Today on Tuesday, the prime minister talked about the illicit outflow of wealth from the developing world, climate change, the Russia-Ukraine conflict and ties between Islamabad and Moscow.
Speaking about the Cold War that “ravaged” the world from the 1950s to the 90s, the prime minister said Pakistan initially had joined a camp because it needed money after the influx of millions of refugees in the aftermath of partition.
“But the country should have left the US camp after a decade or so and pursued an independent policy,” he said, calling reliance on foreign aid “a curse”.
“Such aid stops a country from evolving and developing and becoming self-reliant,” he said, adding that the reliance on hand-outs stops a country from becoming independent.
According to the premier, Pakistan wants trade ties with all countries, including its neighbor’s. Speaking about the past, he said it was not possible to trade with India because of its hostile attitude. He added that trade ties with Iran and Afghanistan could not be developed because of sanctions and a decades-long conflict, respectively.
“Similarly, Pakistan could not establish trade relations with the Central Asian States because of its proximity to the US and theirs to the Soviet Union,” he added.
However, this time, Pakistan will not join any camp, the PM said, adding that trade is the priority of Islamabad for the sake of its population. “What we want now is to trade with everyone,” he said, adding that the main focus of every head of state should be to raise people out of poverty.
About the gas pipeline project with Russia amid the threat of sanctions by the US, the prime minister said the pipeline project suffered because the companies involved in the project had been sanctioned by the US. “Finding a Russian company that was not sanctioned by the US became a problem,” he added.
“Pakistan could also get gas from Iran but it cannot since there were US sanctions on the country,” Imran said, adding that the developing world doesn’t want another cold war because of the consequences for the developing countries.
“I have to say the developing world really wishes there’s not another cold war…how do we go ahead,” he said, adding that half of the population of Pakistan is below the poverty line. “The last thing we want is the world divided into blocks and sanctions,” he said.
If there is a commodity super cycle or if there’s a shock like Covid-19, the other half will also start going below the poverty line, he said alluding to the prospect of another cold war.
He said that he is hoping the Ukraine crisis resolved peacefully. “If we read reports in the western media there is an imminent war between Russia and Ukraine…on the cards. And clearly, western countries take a very oppositional, I would even say inimical view to Russia,” claimed the prime minister.
“For a shrewd politician like yourself, don’t you think perhaps it is too precarious of a time to expand Pakistan’s geopolitical horizon,” the interview asked.
“It doesn’t concern us, we have bilateral relations with Russia and we really want to strengthen it,” the prime minister responded to the question. He added the countries do not develop in isolation but it is the whole region that develops like the European Union.
“We hope that sanctions are lifted on Iran as we are short of gas here,” he said, adding that he hoped the Indian government will focus on lifting people out of poverty rather than proving to the world that Hindus are superior.
In response to a question about being a neutral country amid conflict between global powers, Imran said he did not believe the military solution could be applied to resolve the conflict. “I believe civilised societies resolve their differences through dialogues,” he added.
Meanwhile, Prime Minister Imran Khan has said that the government accords top priority to expanding Pakistan’s industrial base as no country can progress without industrial development.
Speaking at a meeting with Finance Minister Shaukat Tarin and Minister for Industries and Production Makhdoom Khusro Bakhtiyar on Tuesday, the prime minister said that the government is taking steps for the industrial capacity building and revival of sick units in the country.
The prime minister said the industrial sector is making progress due to business friendly policies of the government. He mentioned that the industry is functioning with full capacity, which has increased job opportunities in the country.
During the meeting, the prime minister was briefed in detail about the government’s measures for the country’s industrial development and future strategy. It was further informed that the Ministry of Industries and Production is ensuring provision of facilities for industries and removal of bottlenecks to increase the country’s industrial production in line with the Prime Minister’s vision for the promotion of industries in Pakistan.
The prime minister directed to prepare a comprehensive package in order to expedite measures to expand Pakistan’s industrial base and increase mutual cooperation amongst the concerned government departments to achieve this objective. – TLTP