PSO and PLL are engaged into import of LNG in the country. Under the executed LNG Supply Contracts with Qatar Petroleum/Qatar Energy, PSO imports 5+2 LNG cargoes whereas PLL is left with (1)one LNG Supply contract with ENI Italy as the other Suppleiri.e, M/s Guvnor prematurely terminated the contract in April, 2022 following a series of consistent default in supply of cargoes since year 2021. Starting from July 22, PSO has managed to secure one LNG cargo from Qatar delivery of which was scheduled from January, 2023:

During the ongoing tenure of incumbent Government, Spot purchasing of LNG was made starting April till June, 2022 for enhanced RLNG supplies to power sector. The cost of LNG spot purchases during May to June 2022 was US$ 573 million.
Despite PSO and PLL facing issue of huge receivables towards SNGPL and power, the supply to Power was made to the maximum extent possible against the demand raised. PSO’s shortfall in LNG payments as of June, 2022 is Rs. 285 billion whereas PLL stand at Rs. 119 billion receivables.
RLNG Supply to power (excluding K-Electric) against demand w.e.f 12thApril, 2022 to 30 June, 2022 is provided here under:
In order to ensure zero load-shedding during Eidul Fitr break, the RLNG supply to Fertilizer, CNG and Industry was curtailed for enhanced supplies to power. CNG continue to remain curtailed whereas captive power (export) is restricted at 50% of their load as 30.06.2022. Effective July 2022, the RLNG has fully curtailed for captive (export and non-export) for supply to power during 1-8th July, 2022
For procurement of LNG, PLL was granted exemptions from PPRA Rules on 28thMay 2022 for July 2022 onward delivery cargoes. Accordingly, PLL started procurement of July 2022 cargoes after 28th May 2022, with three tenders closing in June 2022.

However, due to downgrade in credit rating of the country and LC confirmation issues, participation by suppliers remained less.
Thedetail of three tenders conducted for July2022 cargoesisas follows: 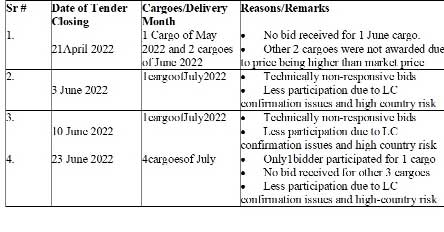 PLL has floated a new tender for procurement of 10 LNG cargoes for delivery during July 2022 to September 2022. The tender will close on 7 July 2022.
Reasons for unavailability of fuel mix and what have we done?
Petroleum Division has been playing its role for arranging RFO requirements as per demand placed by the Power Division. The demand placed and RFO uplifted by Power Division since 16 April, 2022 is given as under

Existing RFO stocks available with the oil Industry (OMCs and Refineries) as of 30/6/2022 are 277,000 MT, whereas 2 RFO cargoes of 130,000MT are off port at present. Import of around 180,000MT is planned for July 2022. Thus, the above arrangements are sufficient to meet the demand of 436,000 MT placed by Power Division during July 2022.
Oil Industry has arranged product but actual upliftment has remained below the demand placed by Power Division due to lesser orders placed by power plants to OMCs and payment issues.
Accordingly, Petroleum Division is making all efforts for arranging required RFO forpower sector and can comfortably meet RFO requirements subject to timely placing of orders and advance payments by respective power plants.