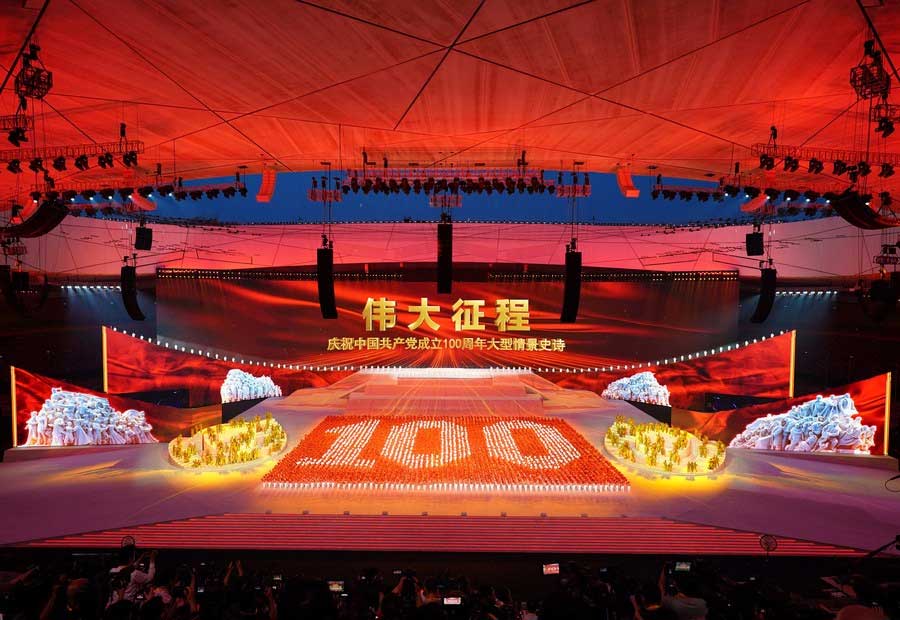 China has established the world’s largest social security system, with 1.02 billion people covered by basic old-age insurance and 1.36 billion people by basic medical insurance.
We have advanced the Healthy China Initiative across the board. Following the principle of putting prevention first, we have deepened reform of the medical and healthcare systems and shifted the focus of medical and health care down to the community level, channeling resources accordingly. We have taken prompt action to improve major epidemic prevention and control systems and mechanisms as well as the national public health emergency management system. We have worked to promote the preservation, innovation, and development of traditional Chinese medicine and strengthened the public health service system covering both urban and rural areas.
As we have stepped up our efforts to build China into a sporting nation, we have launched extensive public fitness activities and vigorously promoted China’s sporting spirit.
We have intensified research on our population development strategy. In response to population aging, we have accelerated the development of elderly care services, and we have adjusted and improved the family planning policy so as to promote balanced development of the population over the long term.
We have given greater weight to strengthening family ties, values, and traditions, and worked to better protect the rights and interests of women and children. We have acted more quickly to develop programs for people with disabilities.
Adhering to the principle that housing is for living in and not for speculation, we have moved faster to build a housing system with multiple types of suppliers and support channels that encourages both renting and buying, and increased investment in the construction of government-subsidized housing. All this has led to significant improvements in urban and rural housing conditions.
To ensure the lasting stability of the country and a happy and comfortable life for the people, the Party has strived to advance the Peaceful China Initiative to a higher level and improve the social governance system. It has enhanced the Party organization-led urban and rural community governance system featuring a combination of self-governance, the rule of law, and the rule of virtue, and it has shifted the focus of social governance down to the community level. This has helped develop a social governance system based on collaboration, participation, and benefit sharing and fostered communities of social governance in which everyone fulfills their responsibilities and shares in the benefits.
We have bolstered disaster prevention, mitigation, and relief efforts, improved workplace safety, and strengthened our national emergency management system and capacity.
We have carried on and developed the Fengqiao model in promoting social harmony in the new era. By continuing to address issues at the source through systematic, law-based, and holistic approaches, and by refining the system for handling public complaints, we have improved integrated mechanisms for preventing, mediating, and defusing social problems. We have adopted a full range of measures to maintain law and order, launching campaigns to combat and root out organized crime, cracking down on Party officials who condoned, covered up, or even provided protection for organized crime, and taking steps to prevent and combat violence and terrorism, new types of cybercrime, and transnational crime.
Since the Party’s 18th National Congress, we have promoted social advancement across the board. The people’s lives have improved in all areas, public participation in social governance is growing, and social governance is becoming smarter, more law-based, and more specialized. We have continued to develop a sound atmosphere in which people are able to live and work in peace and contentment and social stability and order prevail. As a result, China’s miracle of long-term social stability has continued.

Since the launch of reform and opening up, the Party has paid increasingly greater attention to ecological conservation and environmental protection, a major area in which we are still falling short. China faces increasingly grave problems in the form of tightening environmental and resource constraints and ecological degradation. In particular, environmental pollution and ecological damage of various kinds are becoming increasingly commonplace, impairing our country’s development and people’s wellbeing. We will pay an extremely heavy price unless we reverse the trend of ecological and environmental deterioration as soon as possible.
The Central Committee has emphasized that ecological conservation is of vital importance for the sustainable development of the Chinese nation. To protect the environment is to protect the productive forces, and to improve the environment is to boost the productive forces. We must never sacrifice the environment in exchange for transient economic growth. We must stay true to the principle that lucid waters and lush mountains are invaluable assets, continue our holistic approach to the conservation of mountain, river, forest, farmland, lake, grassland, and desert ecosystems, and protect and cherish our natural environment as we do our own lives. We must act with greater resolve to promote green, circular, and low-carbon development, and adhere to a model of sustainable development featuring increased production, higher living standards, and healthy ecosystems.
Through all-out efforts in the areas of theory, law, institutions, organization, and conduct, the Party has strengthened ecological conservation and environment protection in all dimensions and regions and at all times. We have promoted the enforcement of red lines for ecological conservation, set benchmarks for environmental quality, imposed caps on resource utilization, and launched a whole raft of pioneering initiatives that will have fundamental and far-reaching significance. We have worked to implement the functional zoning strategy and set up sound systems in the following areas: property rights for natural resource assets, territorial space development and protection, performance evaluation and accountability for ecological conservation, compensation for ecological conservation, designation of river, lake, and forest chiefs, assignment of equal responsibilities for environmental protection to Party committees and governments, and charging officials with environmental protection responsibilities in addition to their prescribed duties. Corresponding laws and regulations have been formulated and/or revised.
We have optimized planning for development and protection of territorial space, built a national park-based system of nature reserves, moved forward with large-scale afforestation, and better protected and improved the ecosystems of major rivers, lakes, and wetlands, and coastlines. We have redoubled efforts to preserve and restore ecosystems and protect biodiversity, and developed spatial layouts, industrial structures, and ways of production and living that help conserve resources and protect the environment.
Under the Party’s leadership, China has achieved initial success in the critical battle against pollution. Three major action plans on addressing air, water, and soil pollution have been fully implemented. We have continued working to keep our skies blue, our waters clear, and our lands pollution-free, improved rural living environments, and completely banned the importation of solid waste. We have carried out central government environmental inspections, strictly investigated and prosecuted a number of major representative cases of ecological damage, and addressed a number of environmental problems that have aroused strong public concern. China has played an active role in global environmental and climate governance, and pledged to reach peak carbon emissions before 2030 and achieve carbon neutrality before 2060, demonstrating its commitment to act as a responsible major country.
Since the Party’s 18th National Congress, the Central Committee has devoted greater efforts than ever before to ecological conservation. The whole Party and the entire nation have become more conscious and active in pursuing green development, and made significant progress in building a Beautiful China. Our environmental protection endeavors have seen sweeping, historic, and transformative changes.

Since the launch of reform and opening up, the Party has attached great importance to properly handling the relationship between reform, development, and stability. With this in mind, it has defined safeguarding national security and social stability as a fundamental task for the Party and the country in order to cultivate a sound security environment for reform, opening up, and socialist modernization.
In the new era, China is faced with more acute national security challenges, as evidenced by unprecedented external pressure, intertwined traditional and non-traditional security threats, and frequent “black swan” and “grey rhino” events. China’s ability to safeguard national security falls short of what is required of us by the current circumstances and tasks. We need to strengthen our capacity for responding to various major risks, and improve mechanisms for coordinating efforts to safeguard national security.
The Central Committee has stressed that the most fundamental and universal desire of our people is to live in a safe and peaceful nation. We must always be prepared for worst-case scenarios and mindful of potential dangers. We must uphold the primacy of our national interests and take the people’s security as our ultimate goal, political security as our fundamental task, economic security as our foundation, military, technological, cultural, and social security as means of guarantee, and international security as the support. We must find a balance between development and security, between opening up and security, between traditional and non-traditional security, between China’s domestic security and the common security of the world, and between safeguarding national security and creating conditions conducive to it.
Comrade Xi Jinping has stressed that our Party should make national security its top priority. He has put forward a holistic approach to national security, which covers political, military, homeland security, economic, cultural, social, technological, cyberspace, ecological, resource, nuclear, overseas interests, outer space, deep sea, polar, and biological security issues, among others. He has urged all Party members to enhance their fighting spirit and fighting capacity and to fulfill their responsibilities for guarding against and defusing various risks as they exercise leadership and carry out their work.
The Central Committee is acutely aware that, confronted with various types of external encirclement, suppression, disruption, and subversion, we must not be misguided or intimidated, and we must fight to the end with any forces that would attempt to subvert the leadership of the Communist Party of China and China’s socialist system, or to hinder or obstruct China’s advance toward national rejuvenation. Constant concessions will only invite more bullying and humiliation.
The Party has redoubled its efforts to strengthen the national security system and capacity building in this regard. It established a national security commission under the Central Committee, and it has improved the centralized, high-performing, and authoritative leadership system and the legal, strategy, and policy systems for national security. It has also put in place coordination and emergency management mechanisms for national security.
The Party has incorporated security imperatives into all areas throughout the process of national development, placed emphasis on guarding against and defusing major risks that may affect China’s modernization process, and resolutely safeguarded political, institutional, and ideological security. The Party has enhanced efforts to raise public awareness about the importance of national security and national defense and consolidated the public line of defense for national security. Solid steps have been taken to boost development, raise living standards, and ensure stability in border areas and to strictly prevent and crack down on in?ltration, sabotage, subversion, and separatist activities by hostile forces. The Party has withstood and pushed back against extreme external pressure, stood up on issues such as those related to Hong Kong, Taiwan, Xinjiang, Tibet, and territorial waters, and moved faster to build a strong maritime country. Through all these efforts, we have effectively safeguarded national security.
Since the 18th National Congress, we have enhanced national security on all fronts and overcome many political, economic, ideological, and natural risks, challenges, and trials. This has helped ensure that the Party and the country thrive and enjoy lasting stability.
To be Continued…