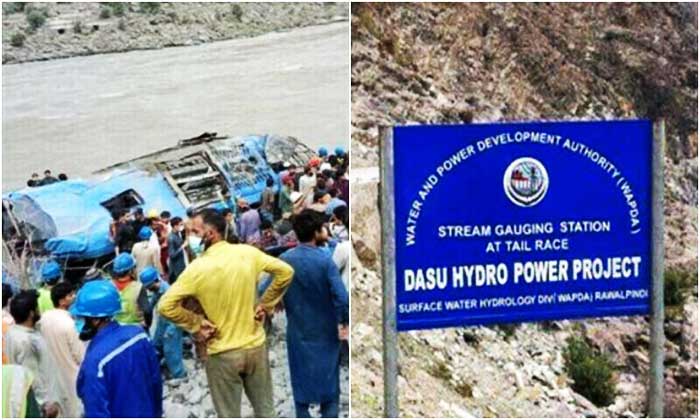 According to details, the anti-terrorism court handed over death sentences on 13 counts to each of two accused – identified as Muhammad Hasnain alias Zawan Mama and Muhammad Ayaz alias Janbaz – in Dasu terror attack.
The court ordered hanging of each convict on 13 counts for the crime under section 302 PPC (on 13 counts) and 7(A) ATA. They were also imposed a 1.5 million fine per victim, which the heirs of the deceased would receive.

At least 13 people, including nine Chinese nationals working on the Dasu Hydropower Project, were killed when a bus carrying them fell into a ravine following an explosion on July 14, 2021.
The bus was ferrying the Chinese and Pakistani workers to an under-construction tunnel site of the Dasu Hydropower Project in the remote Kohistan district of Khyber-Pakhtunkhwa province.

Deputy Inspector General of Counter-Terrorism Department (DIG-CTD) Javed Iqbal had said that more than 100 kilograms of explosive material had been used by terrorists in the Dasu bus explosion.

He detailed that they found parts of the vehicle used in the terror attack from the crime scene, as well as recovered a finger of the terror suspect. The investigators collected footage from all CCTV cameras installed on the route, whereas, the 500-GB video data was acquired for conducting the investigation.

The then foreign minister, Shah Mahmood Qureshi, had said that the bombing was carried out by Pakistani Taliban militants backed by the Indian and Afghan intelligence agencies and that Afghan soil was used for its planning and execution. – NNI