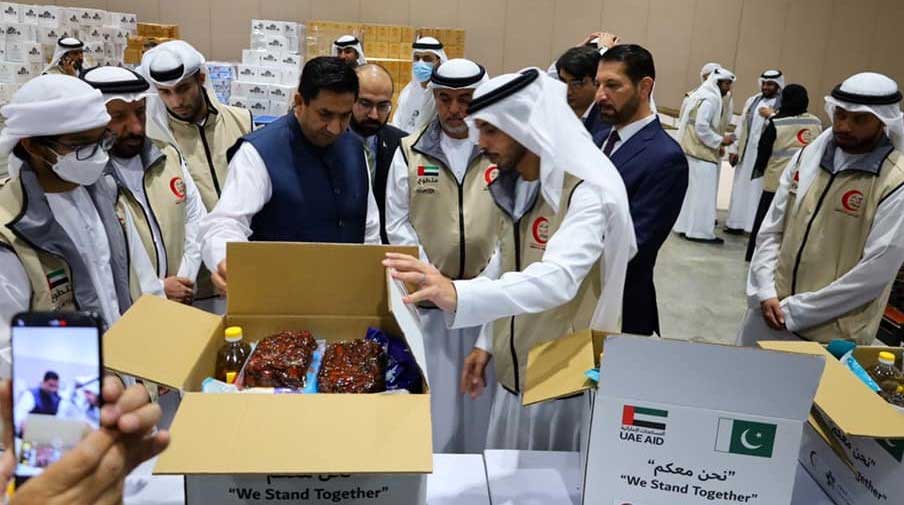 DUBAI (UAE): The UAE has been among the first countries to provide emergency support to the affected people, and the relief kits will be delivered to Pakistan urgently.
The “We Stand Together” initiative was launched by Emirates Red Crescent (ERC), Dubai Cares and Sharjah Charity International in close coordination with the Ministry of Community Development (MoCD), Ministry of Foreign Affairs and International Cooperation (MoFAIC) in the UAE, the Embassy of Pakistan in Abu Dhabi and Consulate General of Pakistan in Dubai with the support of nine other UAE humanitarian organizations including Khalifa Bin Zayed Al Nahyan Foundation, Mohammed Bin Rashid Al Maktoum Humanitarian and Charity Establishment, The Big Heart Foundation, Dar Al Ber, International Humanitarian City, UAE Water Aid Foundation (Suqia UAE), Sharjah Charity House, International Charity Organization and Emirates Charitable Association.
This volunteering initiative was launched simultaneously at following locations across the UAE: 1. Abu Dhabi National Exhibition Center (ADNEC), Abu Dhabi; 2. Dubai Exhibition Center, Expo City Dubai; and 3. Expo Center, Sharjah.
Showcasing the humanitarian soul and spirit of the UAE, hundreds of volunteers from across the seven emirates joined the “We Stand Together” initiative. As part of this initiative, 1,200 tonnes of food, health and general hygiene items have been supplied, including 30,000 food kits.
Hamoud Abdullah Al Junaibi, Secretary-General of the ERC, praised the role of volunteers in supporting and making the “We Stand Together” initiative a success in reducing the humanitarian impact caused by rains and floods in Pakistan. Al Junaibi also acknowledged the vital role played by the coalition of 12 humanitarian organizations in strengthening the UAE’s leading role in Pakistan.
This coalition embodies the unity of the UAE humanitarian work and construes the value of partnerships in one of the most important areas related to improving life and alleviating the suffering of victims caused by disasters and crises, Al Junaibi added.
Dr. Tariq Al Gurg, Chief Executive Officer and Vice-Chairman of Dubai Cares, said, “The UAE has a long history of supporting countries in crisis and the resounding success of the “We Stand Together” nationwide volunteering initiative is a clear reflection of the country’s humanitarian values.
“The coming together of hundreds of volunteers of all ages and nationalities and from all parts of the country to support Pakistan during this time highlights the deep-rooted culture of generosity and compassion that the UAE community proudly shares. We extend our heartfelt thanks to all the volunteers for committing their time and efforts to this initiative and turning it into another UAE success story.”
Abdullah Sultan Bin Khadim, Chief Executive Officer of Sharjah Charity International, said, “The UAE has always been a pioneer in supporting the affected peoples. With all our hearts and with all means of support, we affirm our stand by Pakistan in its affliction as a result of severe floods that claimed the lives of more than 1,200 people, including more than 400 children, affected more than 33 million people, and caused severe damage to facilities and property.
“We pledged to support the affected peoples in response to the call of humanity and in accordance with the approach of the UAE and its noble principles and values. Sharjah Charity International announced earlier its participation in the initiative to support the victims of torrential rains and floods in Pakistan.”
Charge de Affaires, Imtiaz Feroz Gondal along with Dr. Hamdan Mussallam Al Mazrouei, Chairman of the Board of Directors of the Emirates Red Crescent and Sultan Mohammed Al Shamsi, Assistant Minister of Foreign Affairs and International Cooperation participated in the launch of this campaign in Abu Dhabi.
Charge de Affaires thanked the people and Government of the UAE for their continuous support in this difficult time. He also appreciated the work being done by the Emirates Red Crescent for the flood affectees in Pakistan.