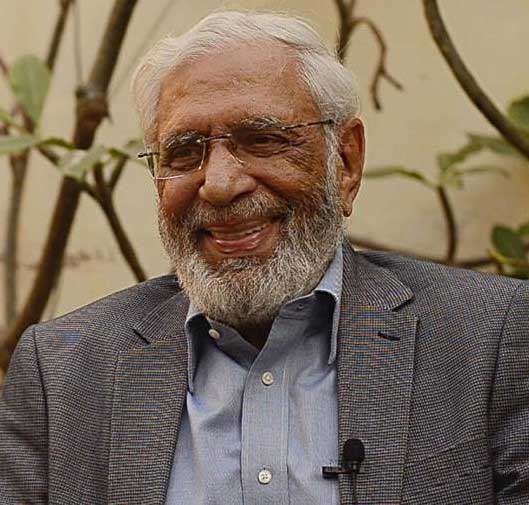 M. Ziauddin worked extensively for major newspapers of the country including
The Muslim, The News, Dawn and The Express Tribune for more than 60 years

ISLAMABAD: Tributes and condolences poured in as soon as the news of senior journalist Muhammad Ziauddin’s passing broke out on Monday with many describing him the “pioneer of economic journalism” and how his death would leave an irreparable void in the Pakistani media.
The veteran columnist passed away at the age of 83 after a prolonged illness in Islamabad. During his illustrious career spanning over 60 years, Ziauddin had worked extensively for almost all major newspapers of the country including The Muslim, The News, Dawn and The Express Tribune.
People belonging to various walks of life including the journalist fraternity, politicians and government officials expressed sorrow over the sad demise and paid tribute to his contributions to journalism.
Senator Mushahid Hussain said he knew Ziauddin since the days of ‘The Muslim’ and found the seasoned writer an outstanding economic journalist and a thorough professional, “who was among the first to do serious and substantive economic analyses with a sharp analytical mind”.
“I personally found him a kind, warm-hearted and well-read journalist. He was a highly principled man who was always ready to lend a helping hand to his friends and colleagues,” he added.
The seasoned parliamentarian further said that Ziauddin launched quality newspapers like The Express Tribune and was one of the most professional editors in the country’s print journalism.
Senior journalist Farhan Bokhari said Ziauddin will be remembered as the “pioneer of economic journalism” in Pakistan.
“He had a unique personality and his integrity was never questioned. He remained a man of very high moral standards throughout his career and therefore always respected for his views,” he added.
Bokhari defined Ziauddin as a “fearless journalist who could never be influenced or pressured by anyone… his departure is a huge loss which can never be repaired”.
Qaiser Butt, a former colleague of Ziauddin, said the seasoned journalist was very “blunt and honest”, adding that he always wrote objective and balanced articles on politics and economy.
Butt said Ziauddin was an assistant editor of The Muslim, where he worked as a junior reporter in 1978.
Owing to his critical views of the establishment during military ruler Ziaul Haq’s era, Ziauddin was barred from writing on political situation of the country, he said.
Though he was an admirer of former prime minister Benazir Bhutto, he always believed that all political leaders came into power after accepting “certain conditions” of establishment, Butt added.
Nasir Malik, a close associate and colleague of the departed, said that Ziauddin besides being a journalist par excellence was also a teacher and mentor, who always performed his duties professionally.
Malik said his doors were always open to his sub-ordinates and would always help reporters in writing news stories.
“My association with him started in 1979 in The Muslim where I was a sub-editor and he was the Commerce Editor,” he said, adding that his entire professional journey was under his tutelage.
Malik said he could not recall a single instance when he had witnessed Ziauddin interfering in his work or asking him to publish any particular news story.
“Many politicians were his personal friends and they would complain that their statements were not published,” he added.
Malik said former premier Benazir Bhutto would often call Ziauddin for his advice on economic issues confronting the country and twice offered him to become his adviser but he refused.
“I am a professional Journalist and I would like to remain one as this is what I am good at,” Malik quoted his former colleague as saying.
Malik termed Ziauddin’s demise a “national loss”, saying the country has been deprived of a journalist with strong moral principles and integrity.
Another senior journalist, Mutaza Solangi said Ziauddin during his career as a journalist never wavered or vacillated on his progressive and democratic ethos, not for a single day.
“Ziauddin lived his life on his terms, his values and his principles. He did not waver and vacillate on his progressive and democratic ethos for a single day. His over half a century work is a compass in our dark days and nights. Goodbye my comrade! You shall not be forgotten,” he wrote on his Twitter handle.
“My teacher, mentor, friend [Ziauddin] passes away. He was an icon. Sad day for Pakistani journalism,” said senior journalist Kamal Siddiqi.
Senior analyst Mazhar Abbas described the esteemed writer as “one of the most outstanding journalists of Pakistan and iconic figure and a guide for all the young journalists”.
“May Allah give his family strength to bear the loss.”
Ziauddin’s close friend and senior journalist Abbas Nasir said the veteran writer was an “iconic journalist who always stood up to autocrats for over 50 years”.
Former journalist and PPP Senator Sherry Rehman said, “Pakistani journalism will be poorer without his vigilant eye and moral purpose”.
His other colleagues and journalists also echoed the similar sentiments.
Information Minister Fawad Chaudhry in a condolence message said Ziauddin was “one of the most capable fiercely independent journalists I came across with”.
“Ziauddin was no commoner a wise man – integrity and boldness added to his personality… you will be missed Zia sb… RIP.”
PML-N President and Leader of Opposition in National Assembly Shehbaz Sharif said the death of the seasoned writer is a huge loss for the Pakistani journalism.
He also prayed for the departed soul and offered condolences to his family.
PPP Chairman Bilawal Bhutto Zardari, in a statement, said the demise of the renowned columnist “marked the end of an era of unbiased and responsible journalism in Pakistan”.