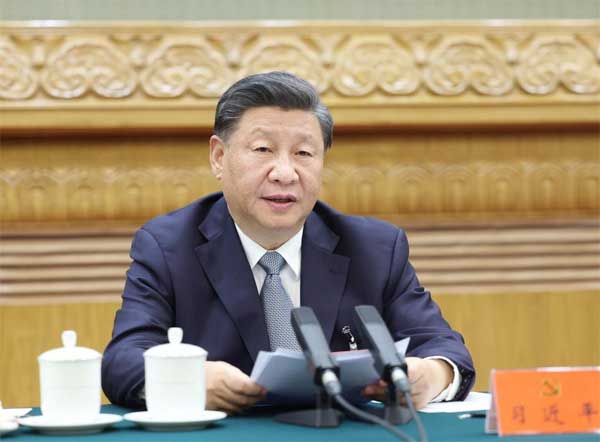 BEIJING: The presidium of the 20th National Congress of the Communist Party of China (CPC) held its first meeting on Saturday afternoon at the Great Hall of the People in Beijing.

Xi Jinping attended the meeting and delivered an important speech.

Presided over by Wang Huning, secretary-general of the congress, the meeting approved a list of 46 members of the standing committee of the presidium including Xi.

Subsequently, Xi presided over the meeting, which proceeded with other items on the agenda. Ding Xuexiang, Chen Xi, Guo Shengkun and Huang Kunming were approved as deputy secretaries-general of the congress.

A report on the examination of delegates’ qualifications by the delegate credentials committee was adopted at the meeting.

According to the report, qualifications of 2,296 elected delegates to the congress were confirmed valid after examination.

The CPC Central Committee with Comrade Xi Jinping at its core has placed great importance on the election of delegates, the report noted.
All primary-level Party organizations and up to 99.5 percent of more than 96 million Party members took part in the electoral process, it said.

The delegates are outstanding representatives of CPC members, representing a broad spectrum of Party members.

A draft of the electoral methods of the 20th CPC National Congress was approved at the meeting. It will be deliberated by delegations.

The meeting also approved matters related to participants who will attend the congress in a non-voting capacity and invited guests.

It was decided at the meeting that the congress will run from Oct. 16 to 22.

The Communist Party of China Central Committee has solicited opinions and suggestions from non-CPC personages on the draft report to the Party’s 20th National Congress, an important way to practice socialist consultative democracy and build up broad consensus before decisions about major issues are made.

A symposium, presided over by Xi Jinping, general secretary of the CPC Central Committee, was held on Aug 31 to make preparations for the 20th CPC National Congress, according to a statement released on Thursday.

During the meeting, Xi stressed the need to strengthen cooperation between the CPC and the non-Communist parties, further consolidate and develop the broadest patriotic united front, pool all wisdom and strengths to the greatest possible extent to enable people from all social strata to strive for building a modern socialist country in all respects, and comprehensively advance national rejuvenation, the statement said.

Multiparty cooperation and political consultation under the leadership of the CPC is the basic political system in China. Non-Communist parties participate in the discussion and management of State affairs. It has been a long-held practice for the CPC to solicit suggestions and opinions from the non-Communist parties, leading figures of the All-China Federation of Industry and Commerce, and those with no party affiliation, on major policies and decisions of the CPC and the country.

The symposium came as the CPC is expected to unveil at the 20th National Congress, which will open on Sunday, its road map for the next five years and beyond, a key period for realizing national rejuvenation.

At the meeting, Xi introduced to the non-CPC personages how the draft report was produced. Leaders of the eight non-Communist parties and the All-China Federation of Industry and Commerce, as well as a representative of personages without party affiliation, hailed the glorious achievements and the historic transformations the nation has made in the past years under the leadership of the CPC Central Committee with Xi at the core.

They also gave their comments and suggestions with regard to building up consensus about national rejuvenation, promoting high-level opening-up, strengthening construction of the united front and the new type of political party system, and improving the capacity for independent innovation.

After hearing their comments, Xi said that in order to draft a report that conforms with the aspirations of all the Chinese people, meets the requirements of the development of socialism with Chinese characteristics and is adapted to the new situation and the new tasks that the Party and the State are facing, the CPC Central Committee fully practices democracy, strengthens research and investigation, and engages in extensive consultations to pool more wisdom.

Soliciting opinions and suggestions from non-CPC personages is an important part of political consultation, and it also provides an effective approach for those outside the Party to contribute their suggestions and wisdom in terms of China’s development and national rejuvenation, Xi said.

Noting that upholding the united front is an important historical experience drawn from the struggles of the century-old CPC, Xi stressed that the historic accomplishments and transformations in the new era resulted from the leadership of the Party, the arduous struggles of the Chinese people and the joint efforts made by the members of the united front, including the eight non-Communist parties, the All-China Federation of Industry and Commerce and those without party affiliation.

He expressed his hope that those outside the CPC could continue to support the decisions and policies of the CPC Central Committee, strengthen their sense of political responsibility and historical mission in uniting and cooperating with the CPC, and form mighty forces to carry out the blueprint to be unveiled by the 20th CPC National Congress.

Today on Sunday October 16, 2022 in the 101 years history of the Communist Party of China (CPC) the 20th CPC National Congress is being held in Beijing, the capital of the People’s Republic of China. (PRC). Total 2,296 delegates were elected to attend the Congress from all over China.

According to Xinhua News and CGTN, The eligibility of the delegates was also verified by a special review committee.

The delegates are composed of outstanding CPC members who are highly-qualified ideologically and politically, have good work and life styles, are competent in discussing state affairs, and have made remarkable achievements in their work.

The delegates include not only Party leaders, but also grassroots CPC members, and some of them are from minority ethnic groups.

The delegates are from a wide range of fields, including the economy, science and technology, national defense, politics and the judicial sector, education, publicity, culture, health care, sports and social administration.

I admire Xi Jinping, a visionary leader not only for China but throughout the world. His last decade services, struggle and achievements are remarkable. After elected as president in China, Xi started an amazing development programme for China and for whole regional and world development and connectivity.

He also started the China Pakistan Economic Corridor (CPEC) for the real and amazing development of Pakistan which is also a win-win project for China.

President Xi Jinping believes in the rich content of the concept of building a community with a shared future for mankind throughout the world. That’s why some western powers are busy in negative propaganda against China. They are reluctant and afraid of the emerging China.

The 20th National Congress of Communist Party of China (CPC) will start their landmark meeting on 16 October at Great Hall of the Peoples in Beijing.The Eyes of global mass media is on this China’s supreme body meeting which will describe & decide the next five year planning of People’s Republic of China.

It is quite evident that for the first time in modern history of the world, China is leading at the global stage for sharing the fruits of prosperity and working for visionary programmes like BRI, established AIIB, activate SCO form to link the whole world. Now at least 150 countries and leading organisations have already signed the B initiative of China’s millennium goals. There I would like to raise a positive point; if the western world wants stability they should try to engage China in economic partnership rather than oppose that great ability of China. China’s initiative is converting World into a global Village.

CPC’s more than century dedicated and devoted role in China is behind all the massive achievements and developments, it is the communist party that plays a vital role under the visionary leadership of Xi Jinping which took China enlightened in socioeconomic, geo-economics, scientific and space developments, due to these efforts and continuity of the developmental process in China they want President Xi jinping for third term. But, this all depends on debate and then approval of 20th CPC Congress. Next five years are very important and decisive. CPC’s decisions will take China to new heights after balanced growth and development by overcoming obstacles from time to time launched by rivalry powers.

In the 20th congress of CPC, about 2,300 party members from across the country will gather. The delegates will elect about 200 full members with voting rights to the party’s elite central committee, plus about 170 alternates, drawing from a pre-selected pool.

According to the Chinese newspapers, the new central committee’s first plenum, held the day after congress ends, will select for its ranks 25 members for the supreme body, the politburo that will form the politburo standing committee, the party top echelon seven members.

The congress will select a top new leadership team and the congress will also confirmreshuffle the top China’s power structure, putting in place that will set policy for economic, diplomatic, security and social matters for next five years, even targets for ahead. We hope that congress will be successful and that it will play a great role in the prosperity, socioeconomic developments of the People’s Republic of China.