Many defence industry players from across the globe have once again converged after 04 years in Pakistan to showcase the latest technological innovations and this is happening at the IDEAS 2022 i.e. the International Defence Exhibition and Seminar which, having been inaugurated by Foreign Minister Bilawal Bhutto Zardari in Karachi. In its 11th edition this year, the biennial defence exhibition has, since its inception, grown exponentially in its outreach, participation and international attendance to an unmatched level.

This growth can be gauged from the fact that 600 local and foreign exhibitors around from 60 countries of the world are taking part in the exhibition this year,. In attendance at the exhibition, this year are trade visitors and high-level delegations from the US, China, France, Germany, Italy, the Czech Republic, Russia, South Korea, Poland, Turkey, the UAE, Jordan and Ukraine While three new European Countries Austria, Romani and Hungry are visiting for the first time in Pakistan. All space of Karachi expo centre has been booked that obviously marks the event’s success.. Turkey and China have set up their country pavilions at the Expo Centre. Various Pakistani companies are scheduled to showcase new inventions like Global Industrial & Defence Solution (GIDS) and National Radio and Telecommunication corporations (NRTC) at- IDEAS 2022.

Hence IDEAS 2022 was conceived as a vehicle to promote Pakistan’s local arms manufacturers alongside providing a stage for international vendors to offer solutions to the requirements of the country’s tri-services. The event has been a success on both counts.

AI & IoT TRANSFORMING PAKISTAN INTO GLOBAL HUB
On second day of IDEAS 2022 in the seminar ‘Artificial Intelligence (AI) and IoT role in Defence and National Security declared the paradigm shift in Military strategy and there is a dire need to transform Pakistan into a global hub for AI, data science, Internet of Things (IoT), virtual reality and other emerging technologies was also conferred.

“The country can become a global hub for AI, data science, cloud-native computing, edge computing, blockchain solutions, augmented reality, and IoT by reshaping and revolutionizing education, businesses and research through the adoption of cutting-edge technologies and AI-driven applications.”

Speaking at the Seminar Federal Minister for IT and Telecommunication, Syed AminuI Haque said, Pakistan is going to launch 5G, which is essential for all latest devices and warfare to run at par with the standard speed.”

The “IoT can help bring increased efficiency in industrial sector ranging from textiles to the defence industry. However, it cannot work without access to a fast, secure internet connection. Therefore, the government has planned to launch 5G internet, to enable IoT devices to function properly,” 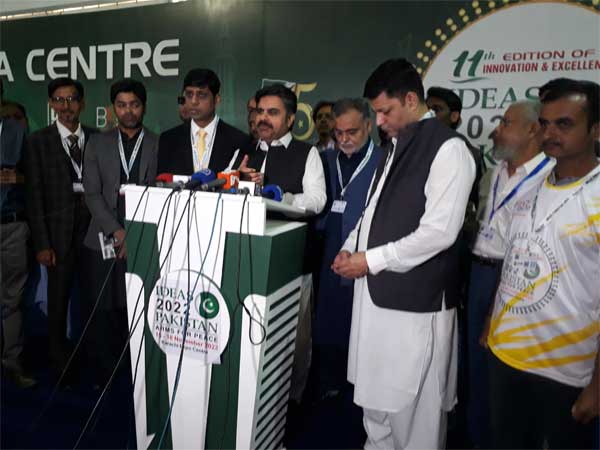 “After bringing IoT to the country, the second aspect required is the connectivity to operate it. For that, the government, in collaboration with the private sector, has installed 180,000 kilometres (about 111846.81 mi) of fibre optics,” he elaborated.

“The authorities are close to bringing all the mobile phone operators for network sharing. Under this agreement, the subscriber identity module (SIM) card holder of one company will be able to run the internet of another company.

“Government has initiated 65 broadband projects, worth around Rs72 billion, in all four provinces; 70% of these projects are near completion and will benefit 35 million people through increased connectivity, including those in rural areas that are either underserved or unserved,” he stated.

While highlighting the role of academia, research scholars and data-savvy individuals in development, the minister for defence production emphasized that “The country’s talented youth should be provided opportunities in the field of AI and new trends of Industry 4.0, through initiatives like the Presidential Initiative for Artificial Intelligence and Computing (PIAIC)”.
“Universities have served as key platforms to set the pace for humanity in the areas of culture, economics, and technology and, more particularly, in the field of AI, which impacts every other field of life.”

“Apart from its social and economic growth and developments in AI have also changed the dynamics of modern warfare,” discussed by Tareen, “With such strategic shifts, the concept of security has widened beyond traditional understanding.

NEW TECHNOLOGICAL ADVANCEMENTS SHOWCASE IN IDEAS 2022, leading to self-sufficiency.
Pakistan has initiated work to introduce the third version of the fighter jet JF-17 Thunder which was part of Pakistan Air Force’s (PAF) fleet that downed two Indian aircraft in retaliation to New Delhi’s aggression in February 2019.

The country has put the second version of the aircraft on display in the ongoing four-day (November 15-18) International Defence Exhibition and Seminar (IDEAS 2022) at Expo Centre in Karachi.

The fighter jets demonstrated their capability and enabled PAF’s pilots to demonstrate their professionalism in February 2019.

Pakistan invented the jet in collaboration with China and inducted it into the PAF in 2007. It was first upgraded in 2015.”Further up gradation is in progress.

Tanks upgraded to fire missile
Pakistan has showcased its latest battle tank called Haider, “which is capable of firing a laser-guided missile with an effective hitting target range of 5 kilkilometressaid an official of Heavy Industries Taxila at its stall setup at IDEAS 2022 by means of indigenous production.
“This is the most advanced battle tank introduced after the Al-Khalid tank.”
Haider was introduced in the recent past and inducted into the Pakistan Army fleet. “This has improved the capability of Pakistani forces on battlefields and Armor Division.

The tank is also capable of going into hiding by generating smoke when it senses a counterthreat. This is an auto gear tank with the steering to move it right and left, replacing the old technology of sticks to do so.
Warfare system

Global Industrial and Defence Solutions (GIDS) have invented the Integrated Electronic Warfare System which helps forces to sense, protect and communicate within a radius of 30-35 Kilometres.

The ‘One Network’ is an advanced communication project, under which 3,000 kilometres of underground fibre optic cable is being laid along the motorways across Pakistan. After the completion of the project, it would meet Pakistan’s telecommunication requirements.

According to the One Network chief operating officer (COO), 2,000 kilometres of fibre optic cable have been laid under the motorway’s communication infrastructure. People travelling on the motorways would get relief from the rush situations. It would also eliminate cash payments at toll plazas.

The system would also be linked to the motorway police to keep a check on any violation of the traffic rules, such as wearing seat belts and the speed limit. Besides, in case of emergency, people would get timely recovery or rescue assistance.

The FWO is also conducting six diploma courses. According to the principal of this project, Col (retd) Atif, about 45 short courses of three to six months of duration were also offered. The graduates from here were associated with technical fields in Pakistan and other countries.

Meanwhile, during a seminar titled ‘Artificial Intelligence (AI) in Defence Market: A Paradigm Shift in Military Strategy and National Security as part of IDEAS-22, artificial intelligence (AI) experts underscored the essential role of universities to keep Pakistan abreast with advancements in this field.

The seminar was organised by the Institute of Policy Studies (IPS), Islamabad, and the Defence Export Promotion Organization (DEPO), where Minister for Defence Production Israr Tareen was the chief guest, said a press release issued here.

Addressing the seminar, Tareen acknowledged the country’s progress in the industrial and defence sectors, driven by AI and machine learning (ML). He also underscored the role of academia, research scholars, and data-savvy individuals in the development process.

“Pakistan can become a global hub for AI, data science, cloud-native computing, edge computing, blockchain, augmented reality, and the IoT by reshaping and revolutionising education, businesses, and research through the adoption of cutting-edge technologies and AI-driven applications,” he said.

He emphasized that the country’s talented youth should be provided opportunities in the field of AI and the Fourth Industrial Revolution [Industry 4.0] through initiatives like the Presidential Initiative for Artificial Intelligence and Computing (PIAIC).

“Apart from social, political, and economic changes, advanced technologies, 5G, and AI have also changed the whole dynamics of contemporary warfare, battlefields, tactics, and strategies, the minister told the participants.

“With such strategic shifts, the concept of security has widened beyond conventional terms and rudimentary procedures to include sophisticated mechanisms and technology-driven procedures. These pose new challenges to the states,” he said.

IPS Chairman Khalid Rahman, who delivered the introductory remarks, highlighted the role of human intellect and research in the process of development. “In this regard, universities have served as the key platforms to set the pace for humanity in the key areas,” he said.

“The progress in AI will not stop and no country should stay behind in AI development,” he emphasized. The role in AI progress is essentially played by universities, where research, creativity, and collaboration … can not only capitalise on the potentials of AI but also deal with the challenges.” 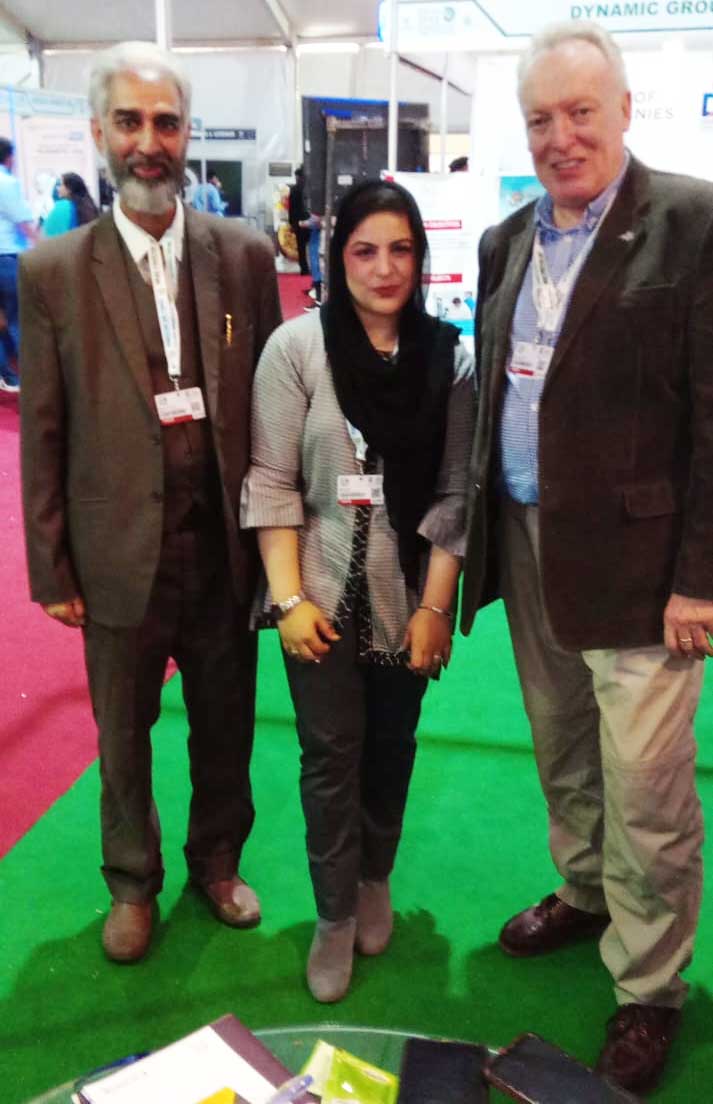 To meet the new complex security challenges of the 21st century, the other speakers presented their research papers, ideas, and findings on different AI-driven applications and processes, upon which the future international security dynamics depend.