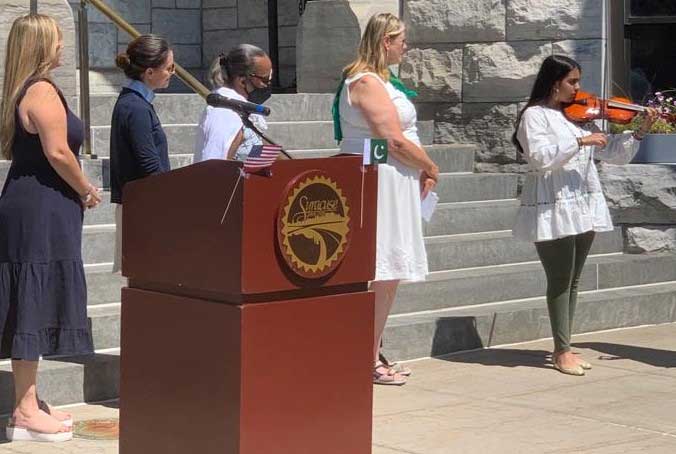 Serena James performed live during the ceremony. Large number
of Pakistani community gathered at City Hall in City of Syracuse,
New York and marked their devotion & dedication for the country

KARACHI: As a human constantly strives and thrives for a better and safe tomorrow, many Pakistanis for the same reason travelled and migrated and have settled in many parts of the world but do not forget their roots.

On August 14, 2022 Pakistani community in America celebrated 75th Independence Day of Pakistan with much enthusiasm.
An event was organised by Zeeshan and Suniya James and along with the Pakistani community, the representatives of the city Mayor, County Executive, local towns, government officials and non profits attended the occasion at City Hall in City of Syracuse, New York and presented their proclamations and citation to the Pakistani Community in appreciation of the contributions they make for the betterment of the country.

Serena James, a 13 year old dynamic Pakistani girl given a spectacular performance, LIVE with violin at City Hall in City of Syracuse, New York. She played Pakistan’s National anthem on the occasion of 75th Independence Day.
Serena started preparing for this performance several weeks ago. She managed the time in such a way that her studies were not affected.

The Pakistani community attended the Pakistan’s Diamond jubilee Independence Day event held outside Syracuse’s City Hall in New York and applauded Serena’s incredible performance.
This memorable performance of Serena James also shows that the Christian citizens of Pakistan keep their love for their country in their hearts even though they are far away from their country and pass this sentiment on to their children. Pakistan is proud of such Pakistanis.

The National Anthem of Pakistan is world famous because of its fascinating tune. When Serena was playing the tune of the anthem with her violin, silence fell on the participants.