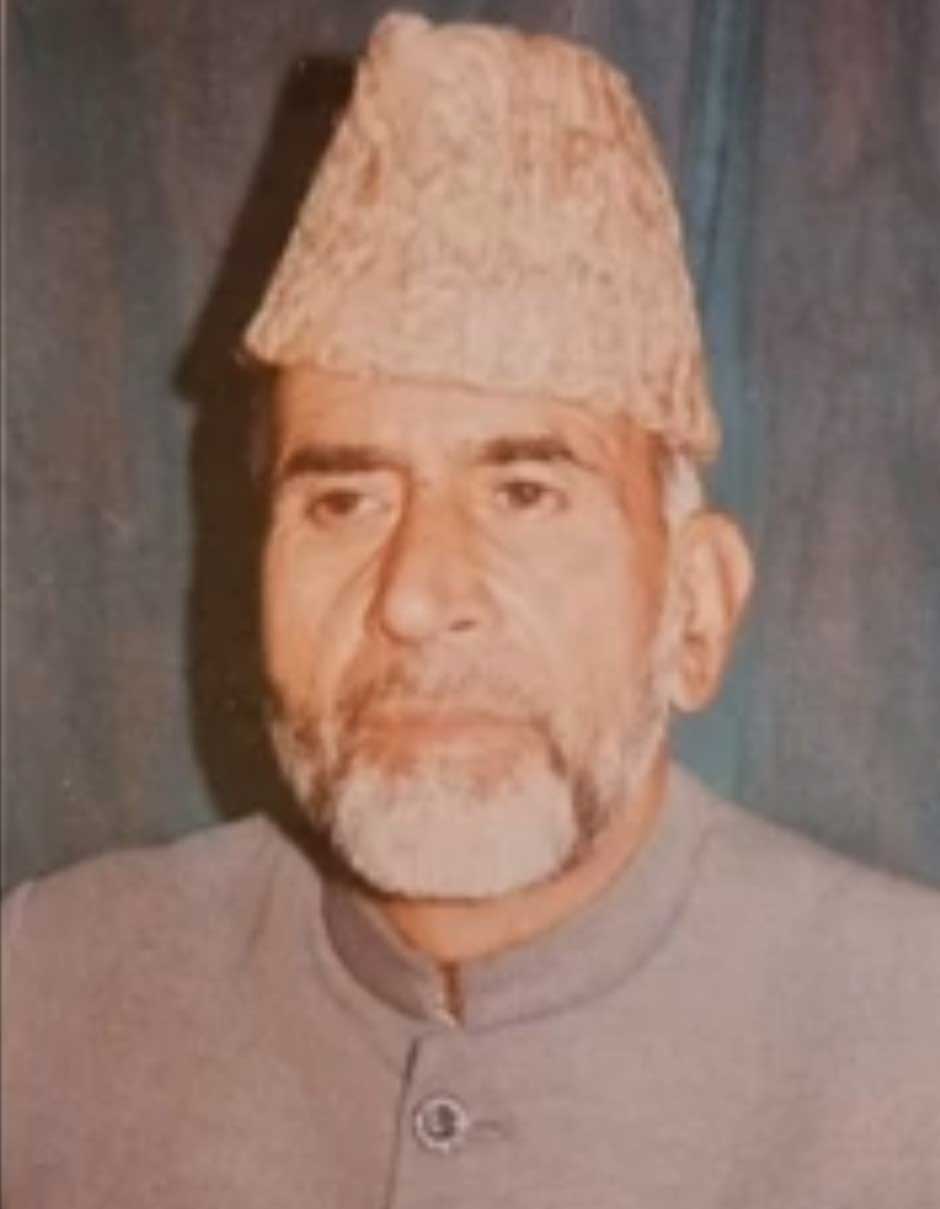 ANDERWAN (Ganderbal): Legendary poet and popular literary figure of valley Late Ali Mohammed Shahbaaz was remembered on his 25th death anniversary with full enthusiasm through an online literary function organised in his honour by Idara Tehqeeq Adab JK. All the members of the literary organisation under the aegis of president Farooq Shaheen prayed for the departed soul. Traditional Fatiha Khwani was observed at his ancestral graveyard of Shath Gund Mawar Handwara where he is laid to rest. Members who participated in the function include Mohammad Abdullah Doolipora, Nazir Safalpora, Azhan Javed, Mushtaq Kawsar, Shafkat Aziz, Socrat Gull, Rohan Khursheed and Faizan Qureshi.
Speaking to the media persons on the occasion president of ITA JK Farooq Shaheen reiterated that the dreams of late Shahbaaz would anyhow be realised with regard to promotion and development of Kashmiri language and literature. Every step would be taken to fulfil his mission of protecting and spreading the noble messages wrapped in Kashmiri language to outside world. Farooq Shaheen further expressed his desire to acquaint the young generation about the teachings and writings of late Shahbaaz so that our young generation too get benefited.
Ali Mohammad Shahbaz, known by his pen name Shahbaz was a Kashmiri revolutionary poet, satirist, humanist, philanthropist, calligrapher, and teacher. His literary work pictured and voiced the agony of Kashmir conflict.
Born on 1 May 1939 at his ancestral village Mawer (Langate), a village in Handwara town of North Kashmir’s Kupwara district. He had his primary school education from Islamia Model School, Qalamabad and completed high school at Handwara. He has done masters in the Kashmiri language.
Shahbaz was a teacher by profession and was appointed as the Principal of Govt. Higher Secondary School Handwara until his death. His father, Gh Mohammad Quershi was a cleric, who died when Shahbaz was in teens. Shahbaz turned to poetry at a very tender age. He was tremendously influenced by his teacher Shahlal Bahar. Bahar was the Vice President of Adbee Markaz Kamraz, member cultural academy Srinagar and Sahitiyah Academy, New Delhi.
At 8:30 PM of Sunday Idara Tehqeeq Adab JK organised an online seminar on its official WhatsApp page in which distinguished literary figure and prominent writers of valley spoke and paid their glowing tributes to Ali Mohammed Shahbaaz. Mohammad Amin Bhat president Adbi Markaz Kamraz presided over the function while noted Kashmiri poet and educationist Shad Ramzaan was the chief guest in the function. Other guests who graced the session include prominent poet, well known literary figure and noted critique Fayaz Tiligami, Ab Gani Beigh, Bashir Chiraag etc.
Proceedings of the literary event began with the recitation of some holy verses of the glorious Quran by Mushtaq Kawsar a well-known Qari, after which Farooq Shaheen president of ITA welcomed the participants in his welcome address. Farooq Shaheen also read his authored article on the occasion about the personality, art and literary contribution of Shahbaaz Ali.
Other distinguished literary figures of Kashmiri language and literature who threw light on the great works and contribution of late Shahbaaz Ali are: Javed Iqbal Mawri (vice president Adbi Markaz Kamraz), Inayat Gull (General Secretary Kashmir Adbi Markaz), Ayoub Dilber, Dr Riyazul Hassan (president Wahab Dramatic Society), Nazirul Hassan Tabasum (president Tehreek Adab Kashmir), G. Hassan Ajmi, Gulzar Jaifar (young poet and intellectual), Maqbool Fayiq (president Joe Adab), Nazir Qureshi Ibni Shahbaaz (President Shahbaaz Cultural Trust) and Socrat Gull.
In his presidential address Mohammad Amin Bhat president Adbi Markaz Kamraz said, “It is really a movement of proud for me to preside over the function in which my ideal, teacher and mentor is remembered. I have listened to his thought provoking lectures and he always used to encourage and love me”.
His lectures were full of wisdom and knowledge. He used to make use of unique words and phrases in his non-stop lectures. He has been really a versatile personality and a noble human being. Chief guest of the event Prof Shad Ramzaan while paying his glowing tributes to late Ali Mohammed Shahbaaz said that Shahbaaz has sacrificed his entire life for the promotion and development of Kashmiri language and literature. He had been a master of different aspects of human life and knew how to express the aspirations and feelings through poetry. It is because of his skilful art of weaving poetic compositions through his own unique words and phrases that Late Ali Mohammed Shahbaaz has risen to such prominence. May his soul rest in peace and may almighty Allah grant him highest place in Jannah. Ameen.