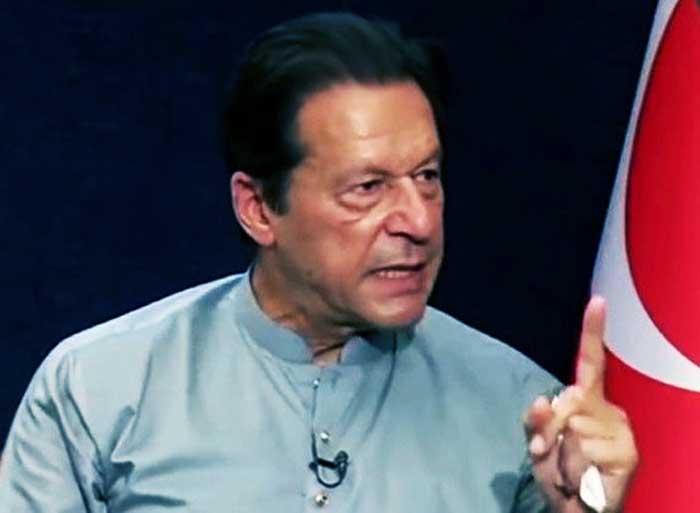 ISLAMABAD: Former prime minister and PTI Chairman Imran Khan has said that the people are looking towards institutions of the country amid a “sea of inflation” and “foreign conspiracy”, pledging that come what may he will not accept the coalition government led by the PML-N.
“We will hold the next power show with full planning and first we will seek permission from the Supreme Court that do we have right to peaceful protest,” he said in an interview with a local TV channel while responding to a question related to his party’s second long march against the incumbent government.
The Pakistan Tehreek-e-Insaf (PTI) approached the Supreme Court earlier this month, seeking directions for the federal and Punjab governments to allow the party to hold a peaceful protest in Islamabad.
The petition seeks to bar the government from using any force, coercive measures and ‘intimidation tactics’ such as raiding homes of party workers, unlawful restrictions and blocking entry points.
“The government of thieves is at the helm [which] is absolving its corruption cases… evidence of foreign conspiracy has been found and there is a sea of inflation..,” Imran said while explaining his decision to stage the protest against the government.
Imran, the ousted prime minister, said due to the aforementioned reasons it is his right to stage a peaceful protest against the government. “If we don’t have the right to peaceful protest then announce openly that there is no democracy in this country.”
Besides the apex court, he said the political and economic instability is also a huge challenge for ‘neutrals’ – a tacit reference to the establishment.
“Come what may I will never accept this government of thieves and will stage a peaceful protest against it,” the ousted premier said.
Speaking about the country’s economic crisis, he said the incumbent government had no plans to stabilise the economy with all indicators turning negative.
“I fear they will leave Pakistan at a point where it will be difficult to fix the issues… I am worried that this could turn into a Sri Lanka or even national security issue….”
Imran insisted that all sectors of the economy including exports, remittances and others were on an upward trajectory during his government.
“I want to ask cherry blossom [Prime Minister Shehbaz Sharif] as to why did he topple my government through conspiracy when he was not ready to deal with the crises,” he asked.