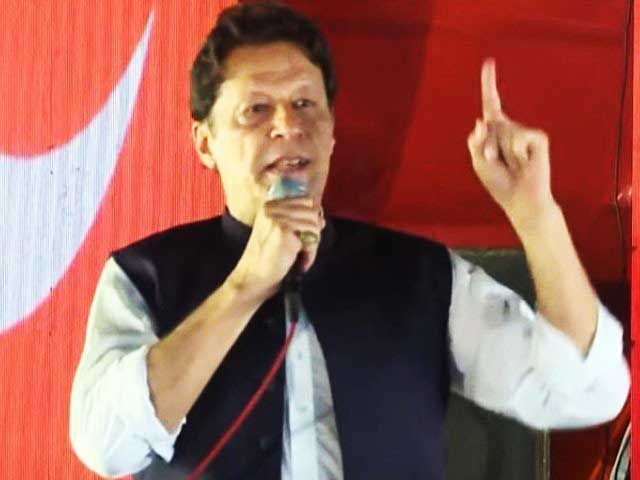 ISLAMABAD: Former prime minister Imran Khan has expressed optimism that his Pakistan Tehreek-e-Insaf (PTI) party will win all 20 seats in the upcoming by-elections on July 17, defeating all opponents in Punjab constituencies despite the unity government getting the ‘support’ of the Election Commission of Pakistan (ECP).
Last month, the electoral authority announced that the by-polls on the 20 vacant seats of the Punjab Assembly will be held on July 17.
The by-polls will be held on PP-7, PP-83, PP-90, PP-97, PP-125, PP-127, PP-140, PP-158, PP-167, PP-168, PP-170, PP-202, PP-217, PP-224, PP-228, PP-237, PP-272, PP-273, PP-282 Layyah and PP-288.
“I challenge the ‘imported’ government… Whatever you do on July 17 we will win all 20 seats in the by-elections,” Imran said while addressing a public gathering in Chichawatni on Wednesday.
He said that the “imported” government had become so unpopular that even if they get the support of the “umpires”, they will not be able to win.
He said that Nawaz Sharif, Shehbaz Sharif, Asif Ali Zardari, and Maulana Fazlur Rehman have been taking their turns in the government for the last 30 years but despite all their experience they have broken all records of inflation and made a mess of the economy.
“When we criticise them they lodge FIRs against us. They have registered 15 FIRs against me but I tell you even if you register 1,500 FIRs, I will not let you go,” he vowed.
Saluting Express News anchorperson Imran Riaz Khan for his courage amid a loud cheer from the crowd, the former prime minister said that the ones who have fear of the Almighty do not fear anyone else.
“That is what they do… they instil fear among the masses but they fail to realise the situation is different [now],” he added.
Imran also said that Zardari is the biggest beemari (illness) of the country for the past 30 years, adding that Nawaz was plundering resources of the country despite being in London.
“Maryam Nawaz cannot say a single word of truth but she’s getting a protocol. The journalists who sell their conscious are looking for the highest bidder,” he added.
Calling the current rulers “thieves”, the ousted PM said that even those who are standing with them will not be forgiven by the nation. “If you stop the protests then there will be anarchy in the country. The nation does not fear FIRs now. The situation has passed that point.”
He also directed that 10 party workers remain present at each polling station “to stop rigging”.
On May 20, the ECP had de-seated 25 MPAs of the PTI for defying party directives and voting for Hamza Shehbaz for the post of the Punjab chief minister.
The reference against the dissident lawmakers sent by Punjab Assembly Speaker Pervaiz Elahi was accepted by the election watchdog for violating Article 63-A which pertains to defection.
The much-awaited verdict had gained political weightage in the wake of the Supreme Court’s verdict on a presidential reference, seeking its interpretation of Article 63-A, related to the disqualification of lawmakers over defection.