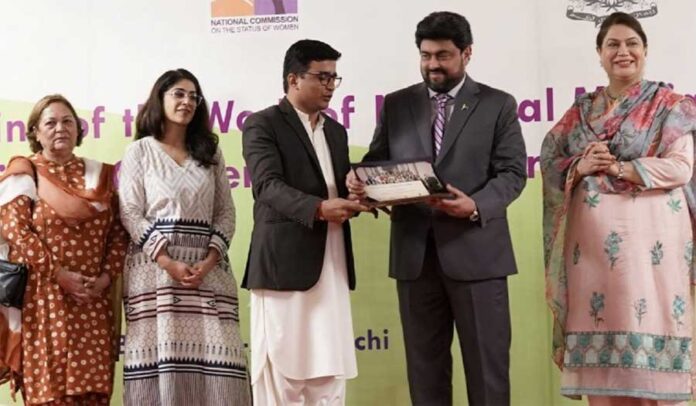 At a ceremony, the NCSW Chief praised the zeal and dedication of the media fellows.

KARACHI: The award ceremony for the showcasing event for the National Media Fellowship on Responsible Representation and Reporting on Gender-Based Violence and Child Marriage was held here Tuesday, says a Press release.

Nilofar Bakhtiar Chairperson NCSW opened the session and welcomed the audience. She appreciated the zeel and commitment of the media fellows and greatly acknowledged the quality of their work. She congratulated all the fellows who won a price and also those who actively participated in this fellowship program.

She assured that NCSW and UNFPA will both continue to collaborate with them. She emphasized that the skills earned with this fellowship should be best utilized for the empowerment of women so that we women can play their actual role in the development of the country.
Muhammad Kamran Khan Tessori, Governor Sindh, while addressing the National Fellowship showcasing event Tuesday, stressed the need for responsible and sensitive reporting while covering issues relating to gender-based violence. He also stressed the importance of highlighting VAW cases as and when they occur. He said that no society can be called civilized without the participation of women respectably and proudly.

He stressed the responsibility and role of every mother to make every child a good human before making them professionals like doctors and engineers, and scientists. He emphasized the need to build strong bonding with children as the wave of violence seen these days has a strong connection with the upbringing of a child. Initially, the relationship between husband and wife is the picture preserved in the mind of every child.

Kamran Tessori highlighted the need to spread love and connectivity with people surrounding us, which is the key to building a peaceful and fear-free society. He assured all possible support to the cause of women’s empowerment and protection.

Behram Gul the UNFPA’s head for Singh Chapter while addressing the event thanked all the fellows for their efforts and dedication and the great work done by them. She assured UNFPAs of continued collaboration for a more sensitive and responsible media.

In the end, awards were presented to the media fellows and collaborating partners by Governor Sindh and Chairperson NCSW.