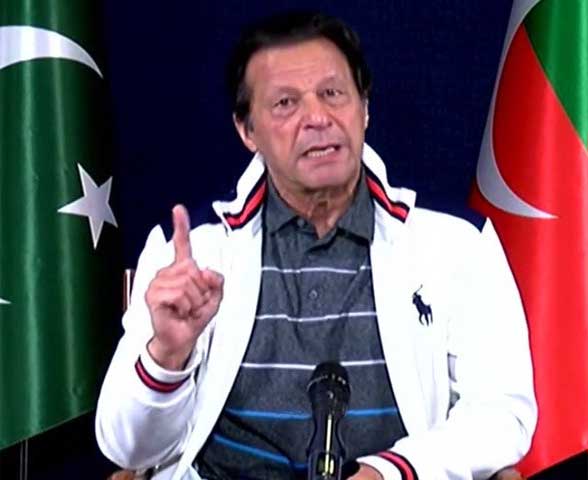 ISLAMABAD: Former prime minister and PTI Chairman Imran Khan has vowed to challenge the recently passed National Accountability (Amendment) Bill 2022 in the Supreme Court, saying it would promote corruption and money laundering in the country.
“I will challenge the amendments to NAB law in the Supreme Court this week..this new law is disrespect to the nation and the country,” he said while addressing a press conference in Islamabad on Tuesday.
Last month, the National Assembly and the Senate passed the Elections (Amendment) Bill 2022 and the National Accountability (Second Amendment) Bill 2021, with a view to bringing the necessary reforms the coalition parties had promised.
The former premier said the amendments to NAB law were tantamount to giving licence for corruption and added that it will favour the incumbent rulers facing corruption charges.
“New NAB law will save Asif Zardari, Nawaz Sharif and Maryam Nawaz and corruption cases worth Rs1,100 billion will be closed down,” he added.
The new law, he said, clipped the powers of the anti-corruption watchdog as NAB will not be able to deal with money laundering cases.
The money laundering cases will be dealt by the Federal Investigation Agency (FIA) which worked under Interior Minister Rana Sanaullah, he added.
“This [amendments] is a bigger crime than bombarding country..those who made such amendments should be put behind bars.”
Imran said the move exposed the real intention of the incumbent government that they came into power to close down their corruption cases. “They were not interested in public issues and they are taking the country towards destruction.”
History will never forget those all internal and external elements who “installed” the incumbent regime in power, he said, adding that soon he will give a call for another protest against the incumbent government.
President Arif Alvi on Monday declined to give his assent to the amendments to the National Accountability Bureau (NAB) laws, calling the new legislation “regressive” in nature, a day after he returned the electoral reforms bill without approving it.
In a letter to the prime minister, the president said that he believed that the NAB law bill, in its latest form would “promote corruption” by ensuring that the “long arm of the law” had been crippled.
“It is also a message to the corrupt, who have amassed tremendous wealth, of which there is no doubt in the minds of the people of Pakistan, that they are not accountable and are free to continue to plunder,” the president said while giving his reasons for his refusal to sign the bill.