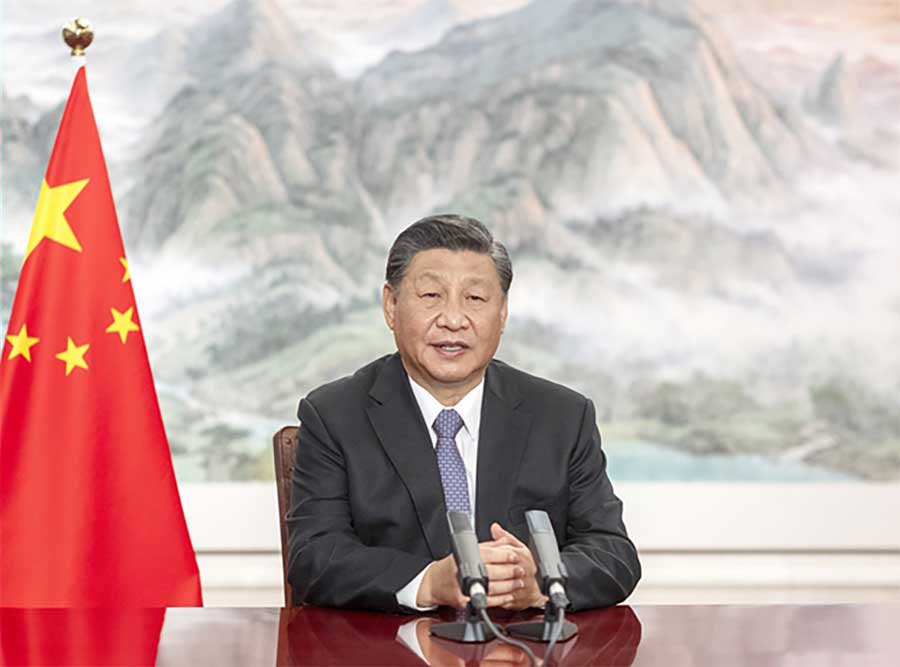 BEIJING: Chinese President Xi Jinping on Friday addressed the opening ceremony of the fifth China International Import Expo (CIIE), calling on all countries to work together toward a bright future of openness and prosperity.

“We should commit ourselves to openness to meet development challenges, foster synergy for cooperation, build the momentum of innovation, and deliver benefits to all,” Xi said via video, noting that the world today is confronted with accelerated changes unseen in a century as well as a sluggish economic recovery.

“China is ready to work with all countries to practice true multilateralism, build more consensus for openness, jointly overcome the difficulties and challenges confronting global economic growth, and make sure that our commitment to openness will bring about broad prospects for global development,” said Xi.

The import expo, inaugurated in 2018, aims at expanding China’s opening-up and turning the country’s vast market into enormous opportunities for the world.

China International Import Expo  With its vast market and continued efforts in advancing opening-up, the opportunities China has to offer are unprecedented.

China will work with all countries and all parties to share the opportunities in its vast market, and  China International Import Expo will step up efforts to cultivate a robust domestic market, upgrade trade in goods, develop new mechanisms for trade in services, and import more quality products, Xi said.

He added that the country will steadily expand institutional opening-up with regard to rules, regulations, management and standards, put into full effect the new Catalogue of Encouraged Industries for Foreign Investment, and further develop the national integrated demonstration zone for greater openness in the service sector.

Visitors taste beer at the Food and Agricultural Products exhibition area of the fifth China International Import Expo (CIIE) at the National Exhibition and Convention Center (Shanghai) in east China’s Shanghai, Nov. 5, 2022. (Xinhua/Liu Ying)
China announced this week that 29 more national demonstration zones for import promotion and innovation will be set up, bringing the total number of such demonstration zones to 43 across the country.

“Skechers has been developing in China for 15 years, and once again we see the bright future from China’s deepening reforms, which brings us a firm determination to increase our investments in China,” said Willie Tan, who is in charge of Skechers’ China, the Republic of Korea and Southeast Asia markets.

China has long been a firm supporter of economic globalization and has worked hard to promote international cooperation when unilateralism and protectionism are on the rise.
In his remarks, Xi said China will engage fully and deeply in WTO reform negotiations, promote trade and investment liberalization and facilitation, and enhance international macro-economic policy coordination, with a view to jointly fostering new drivers for global growth.

China will endeavor actively to join the Comprehensive and Progressive Agreement for Trans-Pacific Partnership (CPTPP) and the Digital Economy Partnership Agreement (DEPA) to expand the globally-oriented network of high-standard free trade areas, Xi said.
The country will also firmly support other developing countries and assist them in growing faster, and promote the building of a community with a shared future for mankind, Xi added.

The expo, designed by Xi, is the world’s first import expo held at the national level, an innovation in the history of global trade.
Since its debut, the platform for international procurement, investment promotion, cultural exchange, and open cooperation has now evolved into a public good for the world.

“Through the Expo, we are able to experience the connection between China and the global market, the mutual promotion of innovation and development, and the opportunities brought by greater inclusivity and openness,” he said. China International Import Expo