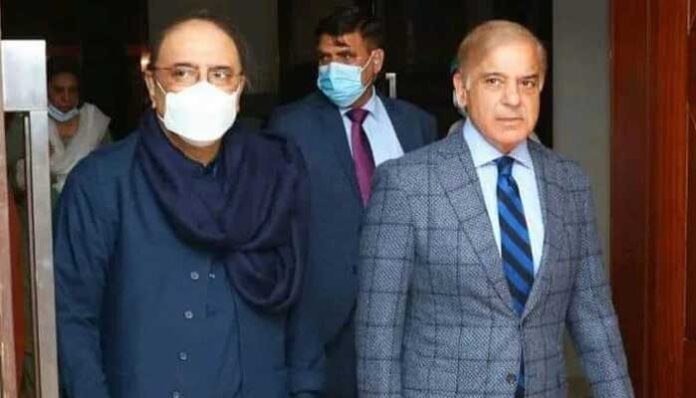 As the appointment Of the COAS nears completion, Zardari and Shehbaz huddle.

ISLAMABAD: Prime Minister Shehbaz Sharif and PPP co-chairperson Asif Ali Zardari held a meeting on Tuesday to discuss the “Overall Situation” of the country on appointment of the COAS.

According to a brief statement issued by the PML-N, Prime Minister Shahbaz Sharif welcomed the PPP leader at the PM House.

The former president inquired after the health of the premier, who contracted Covid-19 a day after returning from his foreign trips to Egypt and UK last week.
PM Shehbaz thanked Zardari for visiting him.

“Both the leaders also exchanged views on the overall situation in the country,” read the statement.

The meeting between the two leaders is seen as crucial as the process to appoint the new army chief had been kicked off with PM Shehbaz on Monday formally wrote a letter to the Ministry of Defence seeking a summary for the potential candidates.

Speaking on the floor of the National Assembly, Defence Minister Khawaja Asif hinted at the formal announcement of the key appointment within the next three days.

“The process will complete in two to three days. The excitement will end, after which we will deal with Imran Khan,” the defence minister said.

He, earlier in a tweet, said the process had started and would be completed soon after fulfilling all the constitutional requirements.

Separately, in a television interview, Asif said the prime minister had written a letter to the defence ministry to send the summary and dossiers of eligible lieutenant generals for the posts of chairman Joint Chiefs of Staff Committee and the army chief.

He said the announcement of the new army chief would be made by November 26, the same day when PTI Chairman and former premier Imran Khan is scheduled to stage a protest in Rawalpindi as part of his campaign to seek early elections.

Asif said the defence ministry had confirmed receiving the letter from the premier while the GHQ had also been kept in the loop.

There were reports earlier that the summary was already received by the Prime Minister’s Office containing names of five eligible candidates. The government, however, denied such a development.

Later the defence minister blamed the media for airing stories on the appointment of new army chief without verification from the relevant authorities.
He said unnecessary hype and hysteria were being created over the process. Appointment rife with speculations

On Sunday, a senior government official had dismissed speculations that there had been any civil-military deadlock over the key appointment.