Metro Matters ‘China As Number One’ a book by Saeed Javid, launched at the Chinese Consulate, Karachi 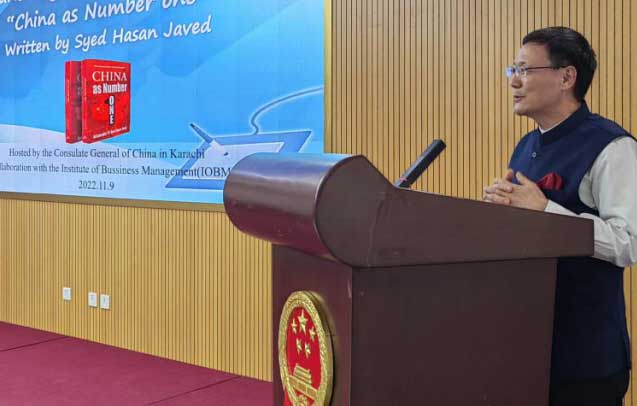 Chinese Consulate General in Karachi organized a book launching ceremony for the new books “China: As Number One” and “China First” (translation) by Saeed Javid, a well-known Pakistani scholar and former Pakistani ambassador to Germany. Li Bijian, Consul General in Karachi, Saeed Javid, the author of the book, Talib Kalim, Dean of Karachi School of Business and Management, Yang Guangyuan, Economic and Commercial Counselor of the Consulate General in Karachi, and more than 40 people from Karachi academic circles attended the ceremony, during the week.

Metro Matters
Saeed mentioned in his book “China: As Number One” that under the leadership of the Communist Party of China, China has gradually risen to become a global power over the half-century. The Chinese people have achieved an all-around well-off in the shortest time in human history and have been completely freed from poverty.

This is a milestone event of great historical significance, and it is worthy of a special touch. In the book, the author expounds views on rising China in terms of national soft power, organizational structure, Confucian culture, market economy and socialist system theory, and believes that China has found a path suitable for its own development and with Chinese characteristics. In addition, Said also analyzed the deep-seated factors that led to the decline of the comprehensive strength of Western countries represented by the United States, as well as the background reasons for the adjustment of the globalized political structure and the trend of multi-polarization.

Consul General Li Bijian said that since the founding of New China, under the leadership of the Communist Party of China, China has undergone tremendous changes. In the past ten years, China’s per capita GDP has risen from US$6,300 in 2012 to US$12,500 in 2021, and the proportion of China’s total economic output in the world economy has risen from 11.3% to 18.5%, becoming the main trader of more than 140 countries and regions. China’s average contribution rate to world economic growth is 38.6%, exceeding the total contribution rate of G7 countries, and it is the biggest engine of world economic growth. The comprehensive ranking of national innovation capability rose to 11th in the world. Nearly 100 million rural poor people have been lifted out of poverty, and there are more than 400 million middle-income groups.

Li emphasized that General Secretary Xi Jinping pointed out in his report at the just-concluded 20th National Congress of the Communist Party of China that China has always firmly pursued an independent foreign policy of peace, and insisted on developing friendly cooperation with other countries on the basis of the Five Principles of Peaceful Coexistence.

Carry forward the common values of peace, development, fairness, justice, democracy and freedom for all mankind, promote the building of a community with a shared future for mankind, firmly pursue an opening-up strategy of mutual benefit and win-win results, and continue to provide new opportunities for the world with China’s new development. Metro Matters

Li said that China’s development is an opportunity for the world and an increase in the power of world peace. No matter how far it develops, China will never seek hegemony or expand. Li also refuted the fact that the Western anti-China forces distorted the facts, created things out of nothing, and hyped up the so-called “debt trap” of the China-Pakistan Economic Corridor and Xinjiang-related issues.

Li briefly introduced the main content of the book and shared his experience after reading it. He hoped that friends from all walks of life in Pakistan will follow Ambassador Said as an example, write more articles and books about China, and tell more stories about China in the new era, the Communist Party of China and the Chinese people to enhance the understanding and understanding between the people of China and Pakistan, and promote the in-depth development of China-Pakistan relations.

People from all walks of life on the Pakistani side spoke positively of the book launching ceremony and expressed that they would write more articles and books to show the Pakistani people a positive, peaceful, friendly, united and progressive China, and make new contributions to the development of Pakistan-China relations.

KCR has been included in CPEC: Murtaza Wahab

Metro Matters
Administrator Karachi, Spokesperson of Sindh Government & Advisor for Law Barrister Murtaza Wahab has said that he will give good news to the people of Karachi next month regarding the Karachi Circular Railway. In Khyber Pakhtunkhwa and Punjab, there is no gas load shedding, while in Sindh, despite gas production, there is load shedding, which has badly affected the industries. We have to make Karachi prosperous, let’s all work together for the development of this city.

KCR has been included in the CPEC through the personal efforts of the Sindh Chief Minister. When Imran Khan took it to Public Private Partnership, the project could not be completed, but once again Sindh Chief Minister Bilawal Bhutto went to China and in the coming days you will also get this good news. President FPCCI presented a memento to Murtaza Wahab on this occasion. Metro Matters Metro Matters