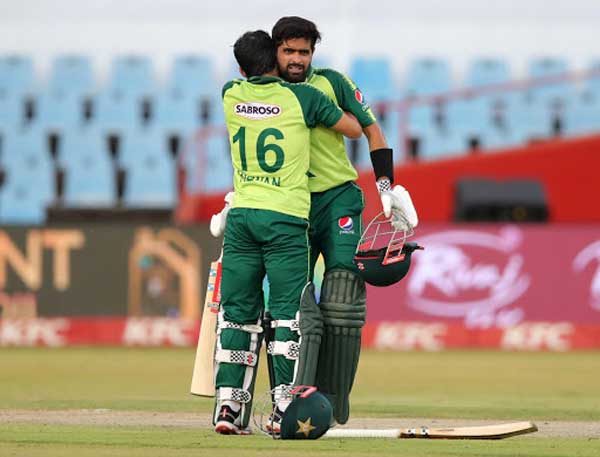 ISLAMABAD: Highest record-opening partnership (197) for Pakistan between Babar Azam and Mohammad Rizwan helped Men in Green take a 2-1 lead over South Africa in the T20I series on Wednesday.
Chasing a target 0f 204 runs, Rizwan and Babar hit the acceleration button in the third over after scoring only 11 runs in the first two. Babar hit Linde for consecutive boundaries before Rizwan dispatched the left-arm spinner for a six over midwicket.
The opening duo accumulated 15 runs off the 4th over of the innings to keep Pakistan up with the required run-rate.
Pakistan needed to make use of the powerplay and the opening duo responded by scoring 64 in the first six overs.
Babar, who scored fifty in 49 balls in last game, brought up his fifty in this match in just 27 balls, to bring up Pakistan’s 100 in just 10 overs for no loss.
Rizwan, who was dismissed on first ball in previous game, also redeemed himself by scoring his second fifty in this series in just 32 balls.
After reaching the number 1 spot in ODIs earlier today, Babar continued to make this day even more memorable by hitting his first T20I hundred in 49 balls, to keep Pakistan on track of the chase.
Babar was dismissed on 122, highest score by a Pakistan batsman in T20Is, but not before taking Pakistan close to the finish line.
Rizwan remained unbeaten on 73, complete the customary finish and win the match for Pakistan by nine wickets.
Earlier, fifties from South African openers, Aiden Markram and Janneman Malan, helped South African post 203/5.
After being asked to bat first, opener Aiden Markram deposited Mohammad Nawaz for a six in the second over of the innings to break the shackles.
Shaheen Afridi, who conceded only two runs in his first over, was smashed for a four followed by a six in his second over by Janneman Malan.
Despite a bowling change, Malan and Markram continued to attack and took 19 runs off the first over of Hasan Ali.
The openers completed team’s fifty inside five overs to give an ideal start to the Proteas.
Faheem Ashraf tried to take the pace off the bowling but Malan was equal to it as he dispatched the all-rounder for two magnificent boundaries in the 9th over.
At the other end, Aiden Markram cashed on his rich vein of form as he brought up his third consecutive fifty in the series off just 25 balls, to bring up South Africa’s hundred in 10 overs.
Pakistan needed a wicket and Nawaz provided the breakthrough by removing Markram for 63.
South Africa promoted all-rounder George Linde to counter the spin threat from Nawaz. Linde took advantage of the angle and hit the left-arm spinner for a six in the eleventh over.
Malan continued to accelerate as he brought up his fifty in just 36 balls.
Faheem Ashraf ended Linde’s 22-run cameo from 11 balls, as the left-hander chopped the ball to his stumps.
Malan was eventually caught by Faheem Ashraf for 55, handing Nawaz his second wicket of the match.
South Africa needed their captain Heinrich Klaasen to step up and provide a strong finish. Klaasen was looking in good form but his stay came to end courtesy off a Yorker from Hasan Ali, cleaning up the wicketkeeper-batsman for 15.
Rassie Van der Dussen, who was making a comeback from injury, played a blistering 34-run knock from 20 balls, to take South Africa to a competitive total.